Last week I gave you this mysterious bit of bone from the Thames to have a go at identifying: 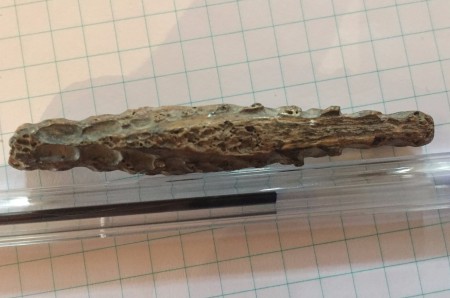 A few ideas were put forward, but DrewM was spot on with the suggestion:

“I think it’s the synsacrum of a bird, without the ilia fused – the foramina are for spinal nerves.“

A synsacrum is a fused section of vertebrae including the sacrum (which is where the pelvis attaches to the spine). General opinion quickly agreed with that suggestion, but the taxonomic group that the synsacrum belongs to remained unguessed.

That is perhaps unsurprising, since it’s hard to find good comparative images of bird synsacra, especially with the hips and lateral (or side) bits knocked off and worn down. 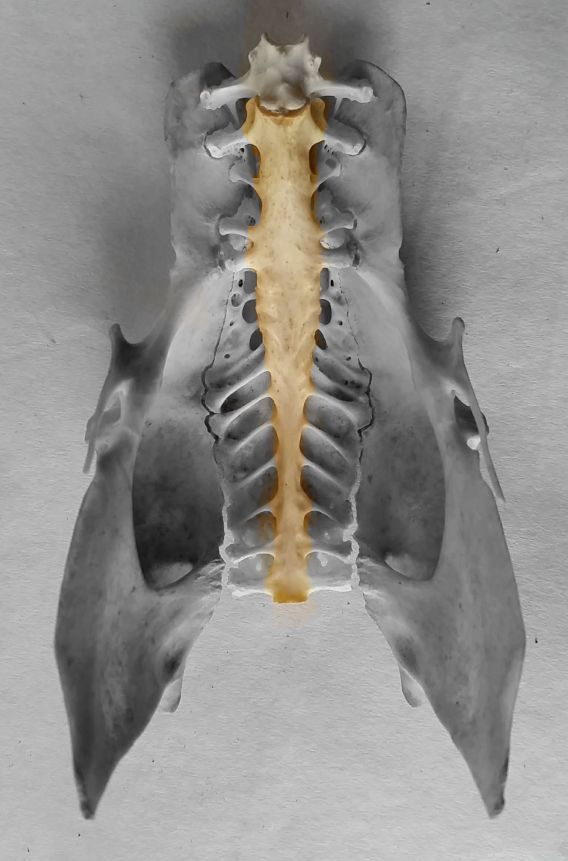 A Chicken synsacrum showing the section preserved in the mystery object

I had a go at looking through some of the comparative bird osteology collections at the Dead Zoo to get a feel for birds with a similar synsacral morphology.

The usual suspect for a bird bone found in the Thames (for me at least) is Chicken, since they’re so closely associated with humans and a lot of the bones washed up on the banks of the Thames are from butchery and food waste. The size was about right, but the vertebral centra (the middle bits) of the Chicken synsacrum become more narrow in the hip-line than in the mystery specimen.

Next I looked at ducks, whose centra taper more in the direction of the tail, then grebes whose whole synsacrum is more narrow overall: 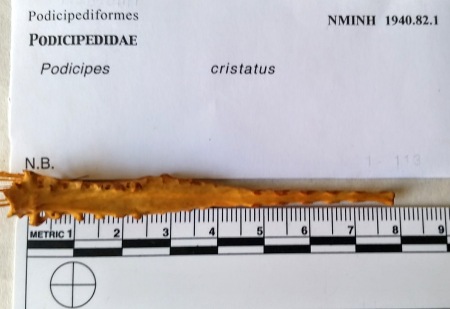 Synsacrum of a Great Crested Grebe

Eventually I made it to the gulls who seem to be a much better fit in terms of shape and the Herring Gull Larus argentatus Pontoppidan, 1763 was a good fit for size: 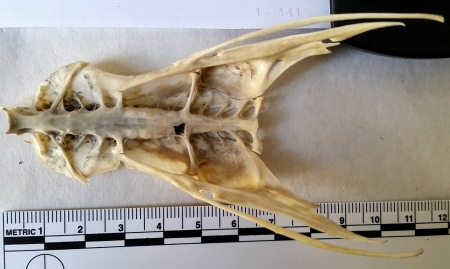 Now this doesn’t mean to say that the mystery object is certainly from a Herring Gull. I would want to have the object in my hand and comparative material available from several specimens to check the identification before being sure, but on the basis of the images that Keith Dunmall kindly provided, I think we’re in the right ball park.

A very Happy New Year to everyone!

Last week (and indeed last year) I gave you this box of bones and one non-bony object, dug up on the Isle of Sheppey to identify: 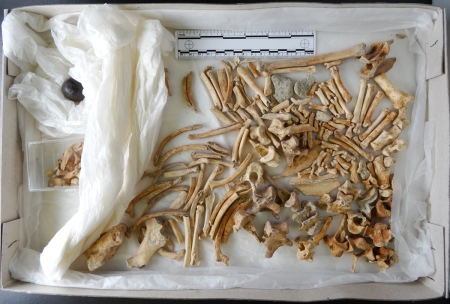 Everyone correctly spotted that the bones were canid (and by everyone I mean Ric Morris, witcharachne, Jake, Paleotool, Allen Hazen and Sam Misan), either Dog or possibly Fox, as suggested by Sam Misan.

The length of the bones would fit both Dog and Fox, but they’re a bit too robust for Fox – here’s a comparison of a radius from the box and a Fox: 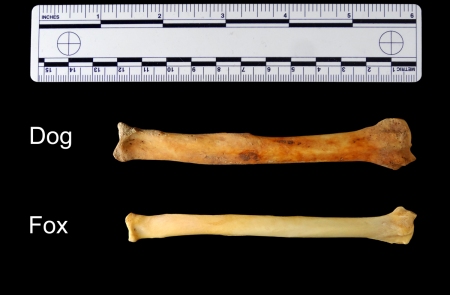 So we have a Dog in the box, but the non-bony object has posed more of a challenge: 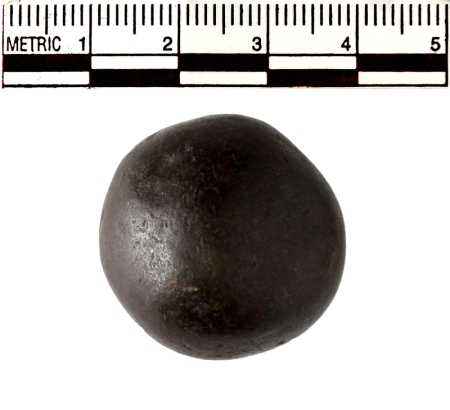 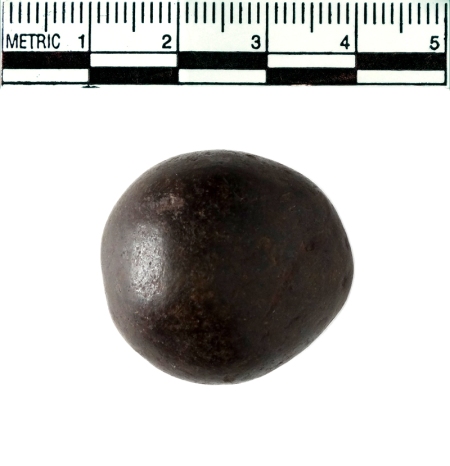 The initial thought was that it might be a musket ball, but it’s rather on the big side for that – more like a small cannon ball or piece of grapeshot.

The material its made of may provide a clue as to what it is. It’s not magnetic and there’s no red coloured oxidisation on the surface, so it’s not iron. It doesn’t have any casting marks, it’s too hard to be lead and although it’s dense, it doesn’t seem to be metal.

To my mind it seems likely to be a naturally formed mineral concretion. It could be a phosphatic nodule, pyrite or marcasite (they contain iron, but they’re not magnetic) or maybe a quartz mineral, like flint (which is what I’m leaning towards).

This may be naturally occurring in the area, but if the materials were collected together it seems likely that the ball had been used by someone for something. The possibility I’m inclined to go for is as ammunition for a sling.

All a bit speculative I’m afraid, but that’s how the game sometimes works out. Thanks to everyone for your input!

Seasons greetings! Since it’s Boxing Day, I thought it would be appropriate to give you a box of bones from an archaeological dig to have a go at identifying:

Here are a couple of detailed images of some of the bones to help you: 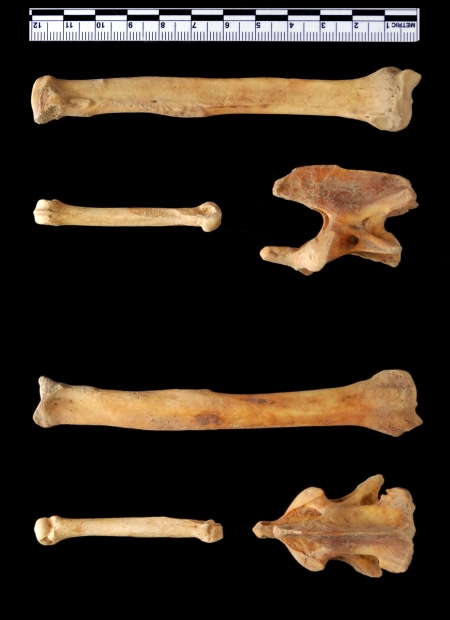 And here is a detail of the non-bony object that’s associated:

You can put your questions, observations and suggestions in the comments box below and maybe we can work out what’s been dug up!

On Friday I gave you these objects to identify from Cyler Conrad, who came across them from an archaeological dig in San Francisco Bay: 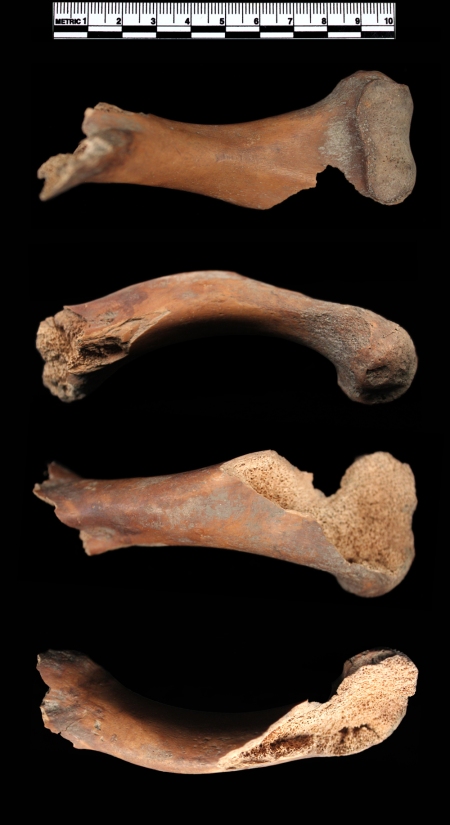 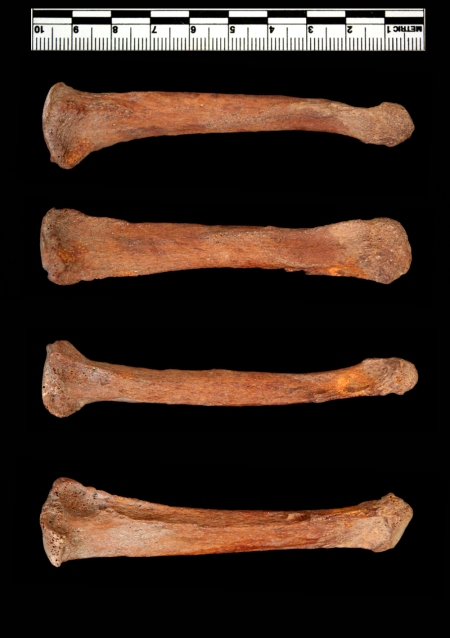 I hasten to add that there is no certain answer to what these objects are, but I think there were some useful observations made by contributors and I will share my thoughts. Please feel free to continue the discussion in the comments below.

Barbara Powell and henstridgesj made some great suggestions, mainly focusing on marine mammals, particularly among the Otarids (Sea-lions and Fur-seals). Some of these large mammals certainly occur in the San Francisco Bay area (well, the Northern Fur Seal Callorhinus ursinus, Guadalupe Fur Seal Arctocephalus townsendi, Steller Sea-lion Eumetopias jubatus, California Sea-lion Zalophus californianus are all there) and they have femurs that are broadly the right size and shape as the bone in the top image – the humerus in these species is quite different, possessing a distinctive crest on the shaft.

However, I’m a bit thrown by the articular surface visible in the top image. In the Sea-lions and Fur-seals the femur has two distinct and narrow articulations with the tibia and fibula, since these animals bear weight on their hind flippers. The fact that the top specimen only shows one broad and fairly poorly defined articulation makes me think it may belong to a Phocid seal (which drag their hind flippers), which for this area would either mean a Northern Elephant Seal Mirounga angustirostris or Harbour Seal Phoca vitulina.

Given the size, I would think it would either be the femur from a large male Harbour Seal (although males are only slightly bigger than females) or a smaller female Elephant Seal, but unfortunately I can’t find comparative material to help draw a conclusion. What I have noticed is that the Harbour Seal does tend to have a relatively broader femur than we see here, but without an Elephant Seal femur for comparison I’m stumped.

The other bone looks like the first metacarpal of one of these animals and doesn’t really add much more information.

Alas, sometimes identifications are hard to make with confidence.

This week I have a bit of break from the norm. Rather than giving you a specimen from the Horniman to identify, I have a couple of guest mystery objects from Cyler Conrad for you to attempt.

These two bones were uncovered in an archaeological site in San Francisco, California, USA and they are proving hard to identify. Any idea what they might be from?

As always, you can put your comments and suggestions below, but please also feel free to engage in discussion about these objects – let’s see what emerges! 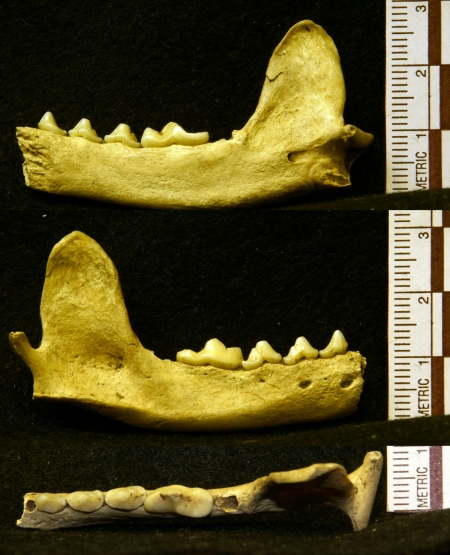 Jake immediately spotted that it was the mandible of a carnivore and ruled out a Cat because the teeth were wrong. General consensus leaned towards this being from a mustelid of some kind – which David Craven confirmed with the correct identification of   END_OF_DOCUMENT_TOKEN_TO_BE_REPLACED

This week I’m going to give you something to identify from an archaeological excavation near Coulsdon in Surrey. It was associated with human remains and some clay pipes that suggest an approximate date between 1600-1850AD. Any idea what this section of mandible belonged to?

After getting the scale wrong last week I have made sure that there are scale bars in the image this time!

As usual you can put your questions, observations and suggestions in the comments section below and I’ll do my best to respond. Good luck!