On Friday I gave you this fragment of bill to identify: 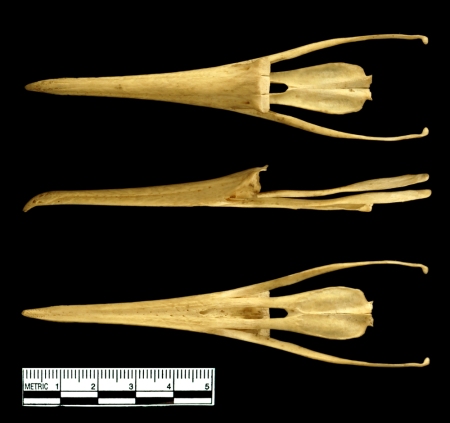 It’s quite distinctive in shape, so I shouldn’t have been surprised when so many of you came to the same conclusion as I did about what it was from. As it is, everyone recognised this as being part of the bill from a member of the Phalacrocoracidae (Cormorant family). Well done everybody!

There are around 40 species of Cormorant, so getting this to species is a bit more tricky and a few possibilities were mooted. However, the two which best fit the shape and size of this bill are the Little Black Cormorant Phalacrocorax sulcirostris and the European Shag Phalacrocorax aristotelis. A quick comparison of the two on the excellent SkullSite.com (P. sulcirostris and P. aristotelis) show that the bill proportions and shape of the bony palate in the mystery specimen are closest to the European Shag  Phalacrocorax aristotelis (Linnaeus, 1761). You can see the similarities very clearly in this comparison of the mystery specimen with the skull of the Shag:

So well done to Barbara Powell and Jake for getting the species right!

Cormorants are often seen flying in a level, steady way (often close to the surface of water) with shallow wingbeats – or drying their wings on a post along a river or coastline after they’ve been in the water.

They are foot-propelled diving birds, which use their narrow and hooked bill to catch fish underwater – something that they are rather good at. So good in fact, that in some parts of the world they are trained and used by fishermen to improve their catch:

All in all, these birds are weird, but very cool!