Last Friday I gave you this mystery sternum to identify:

I had a rough idea of the family, but I was less certain about the species. As it turns out I’m now less sure of the family than I was before, in light of some useful comments.

At first I thought this was the sternum of a member of the Strigidae or the ‘True Owls’ – something that Jake also thought with his suggestion of Tawny Owl Strix aluco, but henstridgesj and Daniel Jones raised the possibility of it being from a seabird and Daniel Calleri suggested it could also be from a member of the Halcyonidae or the ‘Tree Kingfisher’ family.

With the Christmas and New Year break I haven’t had a chance to get to our stores to check specimens, but there is a very useful website that deals with seabird osteology (helpfully called Seabird Osteology) which has some images of sterna. Several of the Procellariiformes (the order containing the Albatrosses, Petrels, Shearwaters, etc.) have a similarly short sternum with a double notched bottom margin, as do some of the Laridae or the Gull family.

I also checked an image of a Kookaburra from a previous mystery object, which doesn’t show the sternum well, but which does hint at a double notched bottom margin:

This has left me slightly less confident that last week’s mystery object is from an owl, but here are a couple of other owl sterna for comparison:

As you can see, the Barn Owl sternum above doesn’t quite have the double notch, although the size is about right. The Eurasian Eagle Owl sternum below (ignore the coracoids and other bits of the pectoral girdle) is a much closer fit, although substantially larger. 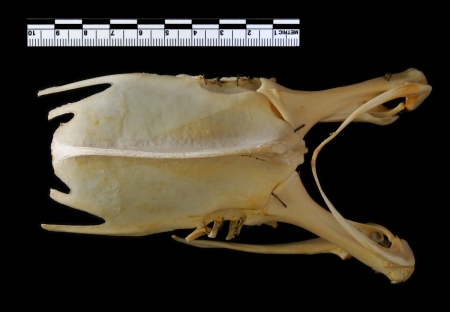 I’ll see if I can find a Tawny Owl sternum to check against, because the shape does seem pretty good for one of the Strigidae and the size is about the same as a Barn Owl, which is in a different family, but has a size range that overlaps with the Tawny Owl. Of course, it could also be from one of the other medium sized owls, like the Long-eared or Short-eared Owls… more to come! 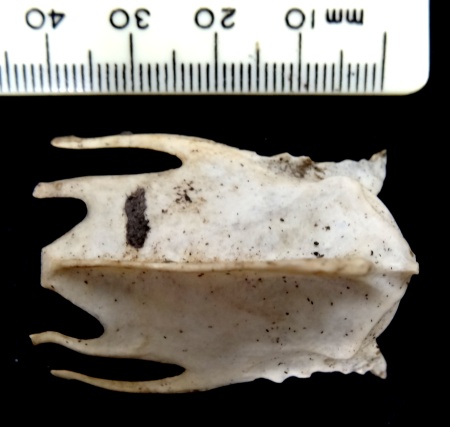 It’s pretty close, but the notches seem a bit deeper, so perhaps one of the Asioninae (Eared Owls) might be a better match for the mystery object?