Last Friday I gave you this perplexing specimen to identify: 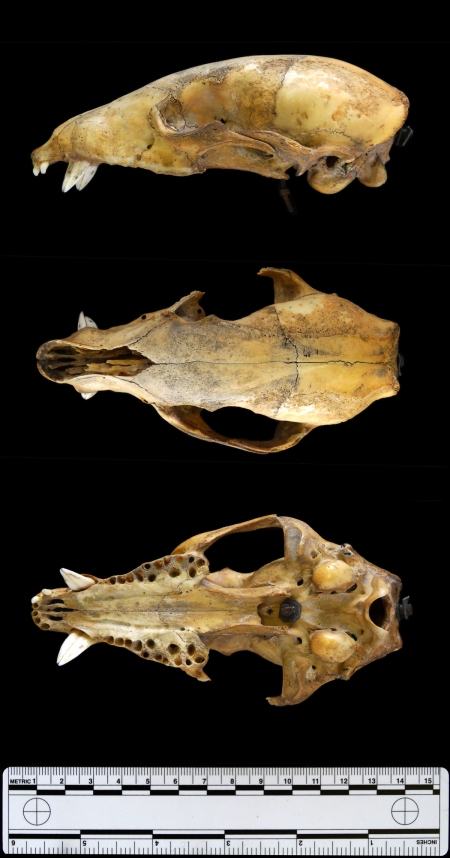 It was labelled as a Crab-eating Raccoon, but the facial region is much longer and narrower than other examples I’ve talked about, and it’s much less robust:

Now the gracile build could just be because it’s the skull of a juvenile (which is what it looks like), but juveniles have shorter and relatively broader facial regions than adults, so that doesn’t work. Even the less robust jaws of the Common Raccoon are too short and wide for the mystery specimen (which I think may discount Robin Birrrdegg’s suggestion).

Another crab-eating option was suggested by Daniel Jones who thought Crab-eating Fox. Now the overall proportions are a good match for this species, but there’s a problem. If the mystery object had teeth this would be much easier, but there are the holes in the maxilla to give us clues about the shape and size of the molars and as Allen Hazen pointed out:

This is indeed the case and so this skull can’t be from a Crab-eating Fox.

On a different tack, henstridgesj suggested that it might be a civet of some sort, pointing us in the direction of mystery object #143 for comparison:

But again this really doesn’t look right – in particular the civets have a narrow constriction behind the orbital process, which is lacking in the mystery specimen. This was noticed by henstridgesj and he suggested that the closest option he’d been able to find was a Coati:

Now the specimen of Coati above is a mature male that was mystery object 54 and it doesn’t look much like our most recent mystery object, but on checking the skulls of juvenile and female Coatis I realised that this is probably the best option so far.

I still want to check some more specimens, but I’m really grateful for everyone’s input on this specimen – it’s been a challenge and you have all helped immensely!

I’ll  be back with another mystery object next Friday, but until then I’d like to wish you all a thoroughly enjoyable festive season!