Last Friday I gave you these tiny bones to identify: 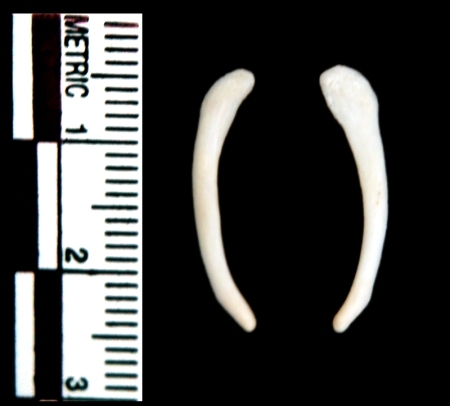 Several suggestions were put forward with soph coming close with the suggestion of a broken furcula and Lena and henstridgesj correctly suggesting the clavicles (or collarbones) of a Cat Felis catus Linnaeus, 1758.

Cat clavicles, like the clavicles of a variety of other animals, are much reduced and are no longer connected to the scapulae (shoulder blades). This allows the scapulae to move much more freely during running, which can increase stride length and in the case of Cats it allows the animal to fit through holes big enough to get their heads through (assuming the Cat isn’t a bit too portly).

These sorts of vestigial structures are interesting from an evolutionary perspective, since they serve little or no direct function, but they still develop as a result of inheritance from ancestral forms that did use them.

In the case of Cats that form would have been around quite some time ago (probably 61.5 – 71.2 million years ago) since the closest related group to the Carnivora with a well-developed clavicle (that I can think of) would be the Chiroptera (bats), where it plays an important role in flight.

Since that divergence of the Chiroptera and the lineage giving rise to the Pangolins, Carnivora and Ungulata the clavicle has been pretty much completely lost, so it’s interesting that even a vestigial form occurs in Cats.

It’s funny to think how such small bones can raise questions that lead us through millions of years of evolution in search of answers, but that’s the nature of studying nature!