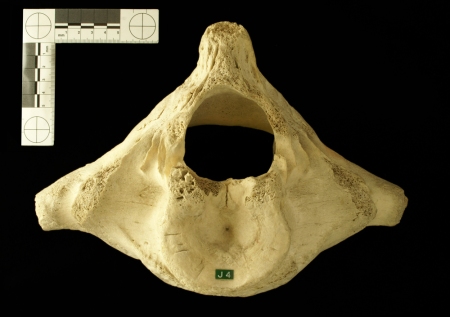 As usual Jake was in like a shot with a correct general identification of whale vertebra. However, identifying what kind of vertabra and what species of whale is a more tricky prospect. The type of vertebra was narrowed down quite quickly by Jake, henstridgesj , Barbara Powell and Kevin K, all of whom agreed that it was one of the cervical (or neck) vertebrae.

Now the neck vertebrae in whales are odd. All mammals have seven vertebrae in their necks (even Giraffes), but whale neck vertebrae are a bit odd as in many whale species they tend to be fused together (as Barbara Powell pointed out). This makes sense when you think about how whales behave – they don’t need to turn their heads much, so having separated vertebrae is not necessary and may even cause problems considering the forces transmitted through the neck vertebrae during swimming, surfacing and feeding.

The pattern of fusion varies according to species and stage of development – some whales have no fusion, some have all of their neck vertebrae fused, others have the atlas (the first cervical that articulates with the skull) free and the other six vertebrae fused and yet others have the atlas, axis (the second cervical that the atlas pivots on) and the next four cervical vertebrae fused and the seventh and last cervical free. Just to complicate matters young whales start off with all of the vertebrae free and they fuse as the animal develops, which means that a young animal will not conform to the adult form.

In light of this situation, the mystery object becomes rather tricky to identify without being able to see the amount of fusion or other parts of the same specimen that may indicate developmental stage. That just leaves us with size and shape to go on, which is a bit problematic unless you have a suitable reference to compare this specimen against.

As it turns out I was unable to find a decent set of images for comparison and we don’t have much whale material at the Horniman. This means I’ve been a bit stumped in trying to identify this specimen – particularly since it came to us with the limited description ‘Vertebra of Whale’.

The size, shape and fusion suggest to me that it is from one of the large Oceanic Dolphins (Delphinidae), such as a Pilot Whale or Killer Whale. This would agree with Barbara Powell’s suggestion, but it would disagree with an identification that was made by a marine mammal expert who has helped me with identifications in the collections in the past. He suggested that this vertebra belonged to a Sperm Whale Physeter macrocephalus Linnaeus, 1758 – presumably a young individual, given the size, although that doesn’t really tally with the amount of fusion.

Apologies for the somewhat tentative outcome of this mystery object, but it serves as another example of the lack of certainty that we sometimes have to accept when trying to identify specimens – it can really be a pain in the neck.