On Friday I gave you this cute little chap to identify: 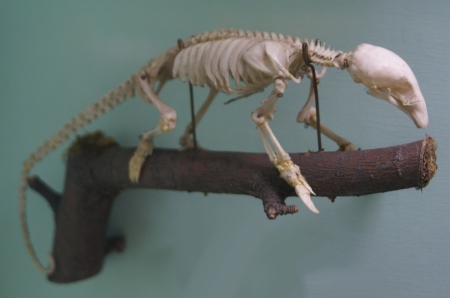 I was very impressed with Neil’s comment, which managed to convey the scientific name of the species without giving it away. Here’s what he said:

I see one eye and two fingers

which neatly leads us to  END_OF_DOCUMENT_TOKEN_TO_BE_REPLACED 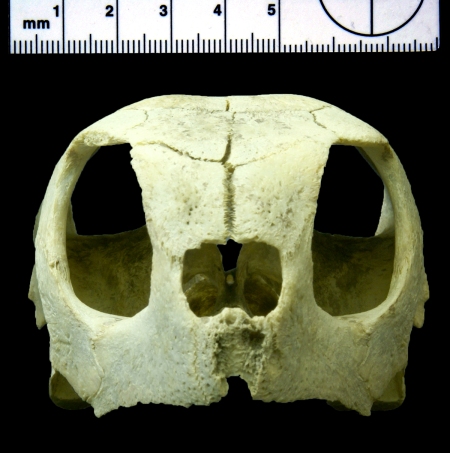 As I suspected, you all worked out that it is the skull of a turtle, so well done all and particularly Jake, who got there first.

Turtle skulls are quite characteristic, in that they have a bill with no teeth and they have no openings apart from the obvious ones like the eye sockets and nose. Most other tetrapods have several openings in their skulls, something that is diagnostic for, and sometime provides the name for, major groups like the main ‘reptile’ group the Diapsida. This name that means two arches, which is a reference to two additional openings present in the skulls of this lineage (which includes the lizards, snakes, crocodiles and dinosaurs – including the birds). Turtles and tortoises are members of the Anapsida, which means without arches.

The characteristics of this skull are those of an Anapsid and the streamlined shape and quite large size (despite it being a youngish adult, as indicated by the unfused sutures) suggests that it is a sea-turtle. There are only 7 species of sea-turtle and the comments provide an example of features that can be used to distinguish this as a  END_OF_DOCUMENT_TOKEN_TO_BE_REPLACED

Imagine if you could bring a species back from extinction – what would you choose and why would you choose it? There are so many factors to take into consideration it all becomes a bit bewildering – do you choose something on the basis of how well it would reintegrate with existing ecosystems, how useful it might be, how much novel information we could learn from it, how plausible it would be to actually carry out the resurrection process, or simply how awesome it would be to see something that hasn’t walked the Earth for millions of years?

I recently asked four palaeontologists what species they would choose to resurrect and their responses were presented at a Café Scientifique balloon debate at the Horniman Museum, as part of the International Year of Biodiversity activities in conjunction with the Royal Society (who are celebrating their 350th anniversary!). The result was a very enjoyable evening for all involved and an insight into some of the considerations that should be taken into account when contemplating resurrecting extinct species.