On Friday I gave you these two objects (with a third photo to show the end) to identify. 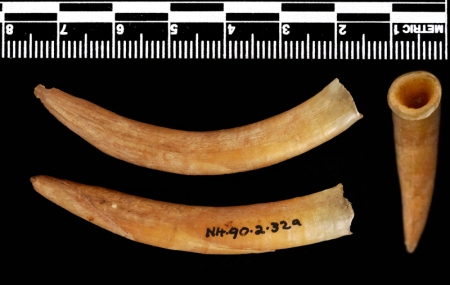 The specimens had me a bit stumped. They are keratinous (keratin is the protein that makes up fingernail, hair and horn amongst other things) and perhaps unsurprisingly they had been labelled as “Artiodactyla horns” given their overall shape. Of course, if they were artiodactyl horns they would be from a bovid (antelope, sheep, cow, etc.), since the other artiodactyls don’t have unbranching horns.

There are nearly 150 bovid species, ranging from the gigantic Gaur to the miniature Royal Antelope, and so far I’ve not been able to find any with horns quite like this. Moreover, the very small size, pattern of growth and relatively shallow depth of the inside chamber of the sheath, don’t really agree with the identification.

My next thought was the spur of a galliform bird, like a Chicken. I compared these specimens to the spur of a male Chicken skeleton in the Horniman’s collection and they looked quite different and much too long, so I gave up on that idea.

Finally I started to consider claws of all sorts of animals, but this didn’t make much sense to me as claws aren’t usually round in cross-section and they have wear facets from being used to walk, climb or dig. You don’t have claws this big if you’re not going to use them and I couldn’t think of much use for a claw like this.

So that left me stumped.

Fortunately, Mieke Roth came to my rescue and made me reassess the Chicken spur identification. It turns out that the Chicken I compared the spur to much have had his spur sheaths  removed and they’d hardly grown back. 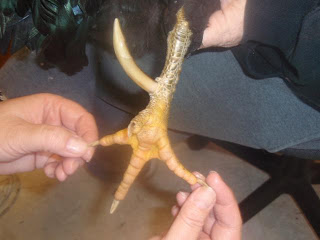 As you can see, the spur identification fits perfectly!

Many thanks to everyone for their suggestions on this mystery object. It really helps to have fresh eyes looking at a problem and suggesting something you’ve discarded in error!