Last Friday I gave you this new acquisition to have a go at identifying: 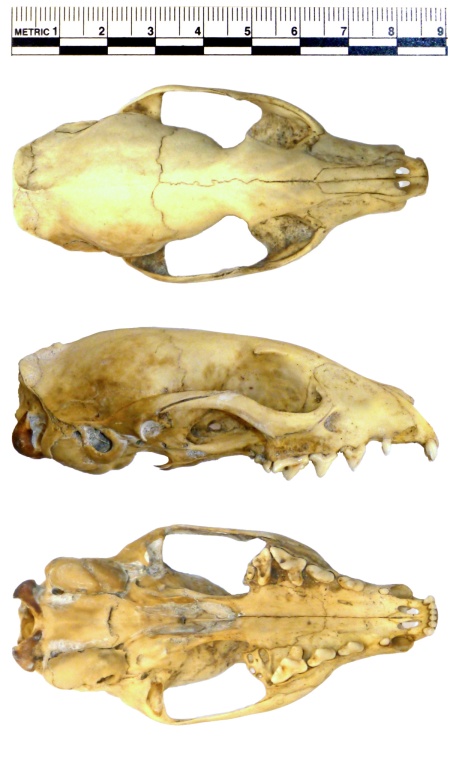 When it arrived on my desk in an decorative box, with bundles of bone wrapped in blue tissue and tied with gold ribbon, it had a small label saying:

Now, I know that having the continent would have been of help for the identification, but I didn’t want my 300th challenge to be too easy.

So how was that initial identification of Mongoose? It was certainly up there in the first of the comments, with Ric Morris (expert on British mammal bones, whose book I am eagerly awaiting) providing a beautifully crafted suggestion. Unfortunately it isn’t right, as the   Herpestidae* tend to have a better developed post-orbital process (that’s the pointy bit on top of the skull, behind where the eye would be) and a corresponding process on the zygomatic (that’s the cheekbone), with the two sometimes meeting to form a post-orbital bar. They also tend to have more robust teeth.

Another (very) cryptic clue came from jennifermacaire who suggested that it was a civet (which can either be a type of viverrid carnivore or a French game stew). This suggestion was supported by henstridgesj and it’s closer than the mongoose suggestion, as the specimen is indeed from a species in the Viverridae. This was noticed by herpderpatologist who provided a handy tip for spotting the difference between mustelids and viverrids:

The split auditory bulla is a clue! It’s something I associate with viverridae;…

If we know that this is a viverrid, it narrows it down to one of  just 38 species…  which is still quite a lot. But by trawling through the images of viverrid specimens on the University of Michigan Animal Diversity Web it becomes easier to start narrowing down the likely group within the Family.

In this case it led me to the genets.

There are quite a few genets, with the Subfamily Genettinae containing in the region of 16 species. Distinguishing between them isn’t entirely simple, as they all look pretty much alike, but there is an excellent French resource that has detailed anatomical characters and images of specimens to help distinguish between genet species.

Working through this I found that the two best options were the Common Genet and the Cape Genet and distinguishing between them is not simple. I’m leaning toward the Cape Genet (or Large-spotted Genet) Genetta tigrina (Schreber, 1776), based on the spacing between the tympanic bullae (the bulbous bones under the skull that house the ear bones), the reduced lingual cusp on the P3 (that’s the tiny bit that sticks out towards where the tongue would be on the upper third premolar) the form of the upper first premolar (P1) and the shape of the maxillary-palatine suture (that’s the junction between the bone of the palate and the part of the upper jaw that supports all the teeth except the incisors).

That’s quite a lot to take in, but by getting your eye in and scanning through images it’s surprising how quickly you can narrow down options by rejecting images where you can see clear differences in the tympanic bulla configuration or cusp pattern on the P3 to leave a couple that need more careful consideration.

And just for the sheer squee of it, here’s what a Genet looks like when it’s alive:

I hope you enjoyed the challenge of the 300th mystery object!

*N.B. the plural of mongoose is “mongooses”.