Apologies for a late and rather short answer to last week’s mystery object, I was in Scotland for the wedding of a very good friend this weekend and haven’t had much time for writing. 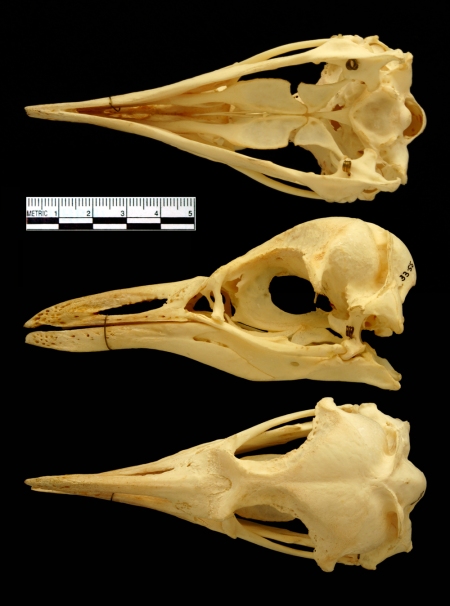 It’s pretty distinctive and I wasn’t surprised to see the correct identification popping up in short order. The big scars above the eye sockets indicate that this bird had large glands for extracting excess salt, which means it was a marine bird. The shape of the bill, particularly the mandible, is also quite characteristic and the wide triangular pterygoid bones of the palate are a give-away for this group.

Ian managed to get the correct species identification within the first hour with Barbara Powell and Robin reaching the same conclusion after some comparison at the very useful Seabird Osteology website. This is the skull of a Jackass Penguin (AKA African Penguin or Black-footed Penguin) Spheniscus demersus (Linnaeus, 1758).

These charismatic little Penguins are found along the coast of South Africa and Namibia, although they spend much of their time out at sea hunting for fish, squid and krill. They get their name from their braying call and because they inhabit warmer climes than other Penguins people actually get to hear them.

I will leave you with a video of some Jackass Penguins in action in South Africa (apologies if the music gets annoying…):