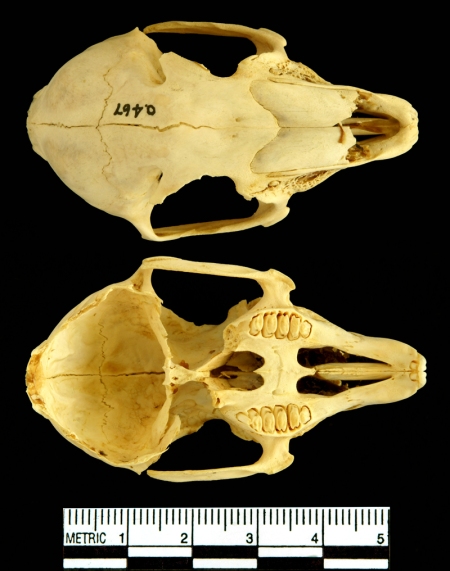 I thought it would be an easy one and I wasn’t wrong, although several of you seemed to second-guess my intentions and assumed that I was trying to trick you because it seemed too easy.

The small second incisors (or peg-teeth) just behind the big first incisors were a complete give-away for the group of animals this skull came from – the Lagomorphs, which Jake spotted immediately.

Henstridgesj, Jamie Revell, Debi Linton and Jake all suggested that it came from a Hare (a young one at that), and Jamie Revell got the right species with the Brown or European Hare Lepus europaeus Pallas, 1778. Jamie Revell was also spot-on in guessing my rationale for having this object when he said “Well, it is March…“.

The ‘Mad March Hare is an interesting idiom, since there is not a particularly obvious reason why March should be associated with ‘mad’ behaviour in Hares. The boxing behaviour displayed by Hares (see video below) happens throughout the breeding season – from February all the way through to September.

This behaviour is often mistaken as male Hares fighting over mates, but actually it occurs when the females are fighting off the unwanted advances of males. The male-male interactions tend to be males chasing off other males in rapid flurries.

The Mammal Society propose a plausible reason why this ‘mad’ boxing and chasing behaviour is associated with March:

“It may actually occur at any time in the long breeding season, but is most visible in March  (lighter evenings, but vegetation still low).“

Since the Brown Hare breeding season lasts such a long time there can be several litters born throughout the year. The young Hares or leverets like the specimen above are well-developed when born (unlike Rabbit kits) and their mother tends to leave them on their own for much of the time, only returning to feed them once a day. So if you’re lucky enough to see a young Hare in a field all by itself, don’t worry, it’s perfectly normal.