Barbara Powell was the first to spot what this shell came from and her identification was supported by Dave Godfrey, Julie Doyle and henstridgesj. It’s a  Tusk Shell which is a kind of mollusc in the Class Scaphopoda – I think that this one is from the genus Dentalium Linnaeus, 1758 based on the large size, but there are lots of species of Dentalium and I’m no expert at identifying these odd animals with that degree of detail.

Scaphopods are seldom seen as living animals, since they live their lives buried in sediment on the sea bed. Their shell is a tube and just the small end sticks out of the mud to allow waste to be ejected and oxygenated water to be taken in. Unlike other mollusks oxygen is absorbed through the mantle rather than through gills, which may act as a limit to the size that Scaphopods can get to.

The large opening of the shell is where the Scaphopod does its feeding, using little tentacles called ‘captacula’ to bring forams, ostracods and other small bits of food to the mouth, where the radula grinds it up. 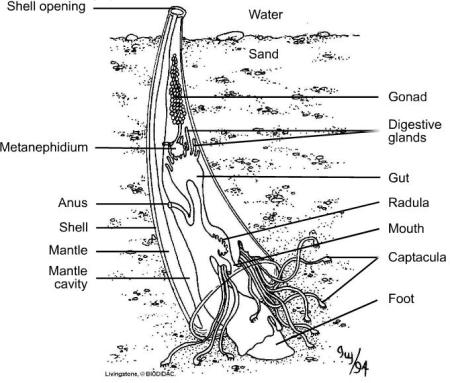 Although the live animal is sedom seen, the shells have been used by various cultures around the world, most notably as beads (thanks to the fact that they have a handy hole through them) and also as money by some First Nation tibes of the Pacific Northwest.

Show me the money!