On Friday I gave you this mammal skull to identify: 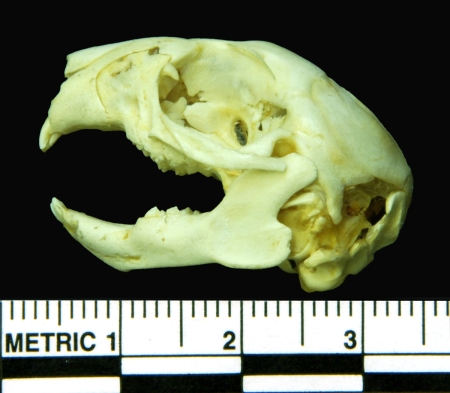 It proved more difficult than I thought it would, although Jake immediately spotted that it was a Rabbit Oryctolagus cuniculus (Linnaeus, 1758), then changed his mind because of the small size. But of course, even the biggest animals start out small – the lack of fusion of the sutures is the clue that tells us this is a ‘neonate’ (or newborn) – just two days old when it died, poor little critter. This is particularly obvious at the back of the skull, where there is a large opening between the occipital and parietal bones. Jake also reconsidered his identification of Rabbit because the back teeth didn’t look right – but in very young individuals the first set of milk teeth will often be different to the adult teeth and they may lack the wear characteristics that you see in an adult. So this is a very, very small Rabbit.

Like Jake, most others spotted the peg teeth behind the upper incisors and realised that this was not the skull of a rodent and was probably from a lagomorph (Rabbits & Hares or Pikas), although the possibility of it being from a diprotodont marsupial (Koalas, Kangaroos, Opossums etc.) was a popular suggestion.

The remains of young animals are always a bit confusing, since they are not only smaller than you expect from the species in question, but the proportions are different too. Usually the eye sockets will be relatively large and the nose relatively small. Muscle scars and crests will also be small or absent, so the skull of a juvenile will look smoother and thinner (or more gracile) than the skull of an adult. This can sometimes cause problems, particularly in palaeontology where sometimes only a few (often fragmentary) remains are available for identification, which makes it difficult to identify the range of variation that might be expected within a species.

A good example of where this has caused confusion is with pterosaurs in the genus Pterodactylus, which were identified as discrete species on the basis of their size and snout length: the smallest was P. brevirostris (meaning short-snouted) and the largest was P. longirostris (meaning long-snouted). As you might have guessed, P. brevirostris was actually named from a juvenile and P. longirostris was named from an adult of the same species. Both are now acknowledged as being different stages in the growth of the species Pterodactylus antiquus.

So if there’s something you want to identify and it’s proving tricky (particularly because of size), it pays to check the features that might indicate that the specimen is immature: Are the sutures fused? Are muscle scars and crests poorly developed? Are the teeth worn? If you answer ‘no’ to these questions then there’s a good chance you’re looking at a young individual. This rule of thumb isn’t perfect, but it’s helped me out on many occasions!