On Friday I presented you with this anthropological mystery object: 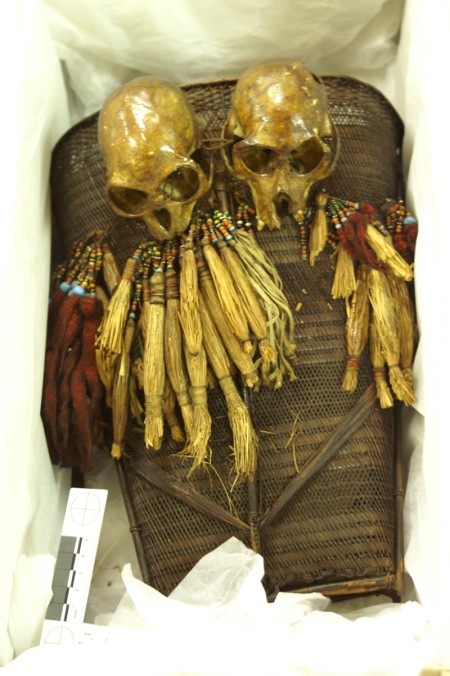 I wanted to know what it is, what it’s used for and where/what culture it’s from. Since there are skulls on it I thought it would be a good idea to ask you to identify them while you were at it. No small task then.

Alistair was first to notice that the skulls belonged to monkeys, then Smallcasserole made the comment:

Jonquil and Dave Godfrey worked out that it’s a basket rather than a bag and then Jonquil came through with a tribe in the right culture and place. I can’t be sure of the particular tribe this is from, but the culture is that of the Naga from the Northeastern part of India (Assam in this instance), who were renowned for the practise of head-hunting (and I don’t mean in the recruitment sense) until quite recently.

As to the monkey skulls, jonpaulkaiser suggested one may be from a Macaque and Jonquil suggested Gray Langur, while Dave Godfrey suggested Macaque and Gibbon. David Craven then provided a remarkably coherent and accurate answer:

Looks like a head-hunting bag, as used by the Naga (I couldn’t give a specific tribe). Still a very fraught part of the world unfortunately.

So, what sorts of monkeys do we have in that part of India?
Loads of Macaques, but others have said Macaque without being censored. Unless that’s too general to be censored…

Okay.
I’ll say Capped Langur on the left (I also considered Hoolock Gibbon).
Macaque on the right? Hard to find good images of macaque skulls for some reason, so I have to shoot in the dark a little. Stump-tailed Macaque.

I think this is about as good an answer as I could hope for, partly because it reflects the levels of uncertainty that we are often stuck with in the museum world. The basket/bag came from Assam and it entered the collections around 1903 judging by its label. There was no tribe name associated, so that information would prove difficult (if not impossible) to track down. The primate skulls are damaged and they are attached to the bag, making them difficult to inspect in the kind of detail needed to make a certain identification.

I was personally leaning towards the skull on the left being that of a Hoolock Gibbon Hoolock hoolock (Harlan, 1834) based on the distance between the eyes, but I’m not convinced that this is reliable and the shape of the nasal opening (long and heart-shaped) doesn’t quite fit with this idea. It could indeed be a female Capped Langur Trachypithecus pileatus (Blythe, 1843) but probably not a Gray Langur Semnopithecus sp. Desmarest, 1822 because their range doesn’t quite fit. It could even be a female Macaque of some sort (although the width between the eyes looks too big for that).

The skull on the right looks like a male Macaque, probably a Rhesus Macaque Macaca mulatta (Zimmermann, 1780) or a Stump-tailed Macaque Macaca arctoides (I. Geoffroy, 1831) – with my preference being the more common and widely distributed Rhesus (compare 1 & 2). I am keen to see David Craven’s reasoning, to see what I may have missed.

Many thanks to everyone for their comments and suggestions. I particularly liked the idea by cackhandedkate that the basket was one of Lady Gaga’s costumes – something that I would not be surprised by.