It seems that the change of tack on the mystery object was a welcome variation – record views and far more comments than usual as everybody strove to find the answer. Given that favourable response I will try to include a more diverse theme for the choice of Friday mystery objects in future!

Here is the object in question: 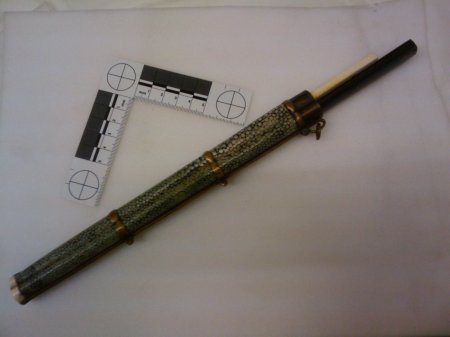 You were also given a couple of detail images and asked to work out a) what is it, b) what animal bits it’s made from and c) where it’s from. I thought this would be fairly easy, which is why I didn’t include the photo below, which would probably have given the game away immediately:

Clearly this is a set of  personal dining utensils from the Far East – Japan to the best of my knowledge, although similar sets were also used in China (well done to my dad on getting it!). This particular set is complete with yanagiba-type  knife (blade in the shape of a willow leaf), chopsticks (hashi) and a toothpick (youji) – all neatly packaged together in a case for carrying in/on an Obi (a wide belt or sash). The chopsticks, toothpick and ends of the case are made of bone rather than ivory – look at the Haversian remodelling  that causes the discoloured speckles at the centre of the bone end cap in the image below (well done Debi Linton). Commiserations to SmallCasserole for referring to the chopsticks as “chopsticks”, but missing the fact that they were actually chopsticks – say what you see!

The metal fittings appears to be bronze (not brass as I conceded to in the comments – brass  is more greyish/greenish/blueish than this metal, but bronze fits the bill) and the body of the case is composed of shagreen or shark/rayskin as it is more functionally referred to (well done PyroClaire!). The most likely species used in making this case is the Cowtail stingray (Pastinachus sephen) from the Indo-Pacific ocean. The off-white inclusions are the polished remnants of enamel dermal denticles that are embedded in the skin of Elasmobranchs (sharks and rays).

Please forgive any errors in my Japanese names for the components or in the issue of provenance – I will happily take direction if I have erred.