Last week I gave you this specimen to identify, which came in as an enquiry after being found in someone’s toilet: 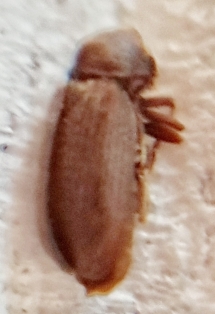 There were a variety of great responses, with some fantastic cryptic clues, including an anagram by Claire Miles (great stuff!). Most opted for this being Stegobium paniceum, which is also known by the aliases Drugstore Beetle, Biscuit Beetle or Bread Beetle.

However, the mystery critter has a subtly different pronotum (that’s the plate over the thorax that extends over the head).

Another suggestion was woodworm or one of the false powderpost beetles, which covers a range of wood-boring beetles, with Liberty Hightower correctly giving the more taxonomically constrained suggestion, of something from the Tribe Anobiini (which includes Stegobium). However, my colleague Olivier sent me an email with a very definitive identification, informed by a past experience with this particular pest – the Furniture Beetle Anobium punctatum De Geer, 1774.

These beetles have a distinctive pronotum that supposedly looks like a monk’s cowl, with a more distinctive hump and slightly pinched looking back section than the more smoothly curving pronotum of the Stegobium. They fall into the broad category of woodworm because their larvae feed on wood, making tunnels hidden from view and only becoming visible when they emerge from small holes in the wood as adults, leaving a little pile of wood dust as they go.

The presence of these beetles in a toilet isn’t related to the water in the bowl or even wood of the seat – it turns out that there was a window above the toilet and the adult beetles, in an attempt to leave the building after emerging, were attracted to the light from the window and flew into the glass only to bounce off and land in the toilet.

This attraction towards light in the dispersing adult stage of the beetle is a handy behaviour if you want to keep track of these pests. If you’re concerned you may have active woodworm it’s worth checking your windowsills in the summer to see if you have any of these adult beetles lying around. Of course, there are other species that would also be worth checking for, since there are plenty of beetles whose larvae would be considered woodworm. Keep your eyes peeled!