On Friday I gave you this complete skeleton to identify: 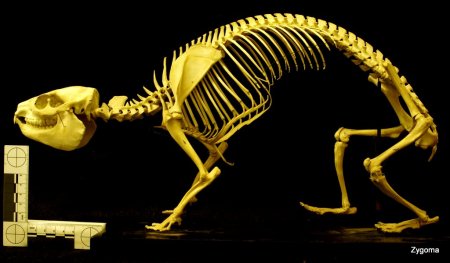 As I expected, you managed to identify it in no time, with excellent use of hints and clues to get the answer across without spoiling the fun.

John the Hutch was the first to get it right (and was in fact the first to respond) with Carlos, henstridgesj, Jake, Henry Gee and Julie Doyle also recognising that this was the skeleton of a  END_OF_DOCUMENT_TOKEN_TO_BE_REPLACED

I must apologise in advance for the somewhat short answer to the mystery object this week. Partly it’s because I don’t know much about musical instruments and partly because I’ve been busy pulling together a guest post for GrrlScientist over at Punctuated Equilibrium on the Guardian science blogging network ([EDIT it’s live now]). Excuses aside – on with the answer!

I was impressed that everyone immediately spotted that it was a musical instrument, but I was even more impressed that so many of you identified which continent it was from (Africa) and the general type of instrument. Historically in the West this has been referred to as a ‘thumb piano’ which is a very Eurocentric interpretation. A more accurate generic name is lamellophone (or lamellaphone).

There are lots of different sorts of lamellopone from different regions in Africa, including the mbira, the sanza, the kalimba and lukembe. This particular example differs from all of these other forms in the way in which the lamellae are secured:

This particular type has tangs on the lamellae that are driven directly into the wooden resonator, rather than having a fretboard like an mbira: This means that the instrument is not tunable, unlike the mbira.

This unusual characteristic identifies this mystery object is an  END_OF_DOCUMENT_TOKEN_TO_BE_REPLACED

On Friday I gave you a specimen that I had to identify myself earlier in the week:

The first steps of this identification are quite straight-forward – in the words of Jake it “Looks a bit sheepy and a bit deery” which pins this firmly in the order Bovidae. Dave Godfrey neatly summarised what makes it look sheepy and deery – “Diastema, lack of upper incisors, and the shape of the teeth“. Rob went a step further and ruled out deer, sheep, goats and camelids – coming to the conclusion that this is an African bovid of some kind. Then David Craven blasted through the narrowing-down process and hit upon the same species as I had concluded it was, namely a  END_OF_DOCUMENT_TOKEN_TO_BE_REPLACED