Last week I gave you this unidentified skull from the collections of the Dead Zoo in Dublin to have a go at identifying: 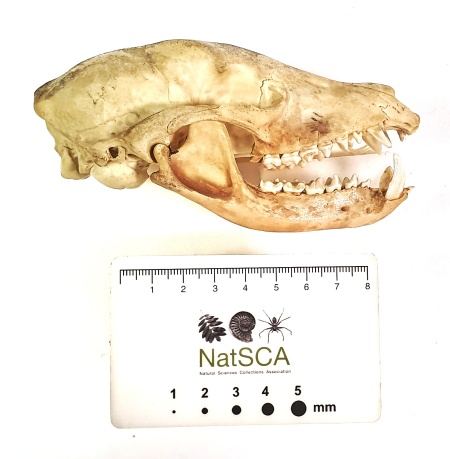 I wasn’t sure how difficult this would be – I know carnivore skulls can be a bit of a challenge, but this is a critter that’s come up as a mystery object a couple of times before. As such, I did expect a few of the regulars to recognise this, but it proved more difficult than I thought.

That said, nobody got it. Well, somebody got it, but that person was nobody with the simple statement:

Of course, there’s more than one kind of coati, in fact there are four: the Ring-tailed, the White-nosed (or Coatimundi), the Eastern mountain and the Western mountain.

The mountain coatis are in the Genus Nasuella and they have a very narrow and gracile rostrum (that’s the muzzle area) – so this is not one of them. The other two are in the Genus Nasua and they are recognisable by their upward tilted nasal area and their upper canines which are very tusk-like – projecting forward and triangular. The mature adults of both species have a big sagittal crest, which this lacks, but that’s probably because it’s not a mature adult.

Differentiating between the two species can be tricky, but the region around the auditory bullae can be useful in this. The Animal Diversity Web has some very useful images that can help.

The slightly more inflated auditory bullae and the angle of the mastoid process (where the muscles that control the movements of the outer part of the ear attach to the skull) tells me that this is most likely to be the White-nosed coati Nasua narica (Linnaeus, 1766).

I hope that helps in case you need to identify another of these any time soon.