Last week I gave you this impressive beetle to try your hand at identifying: 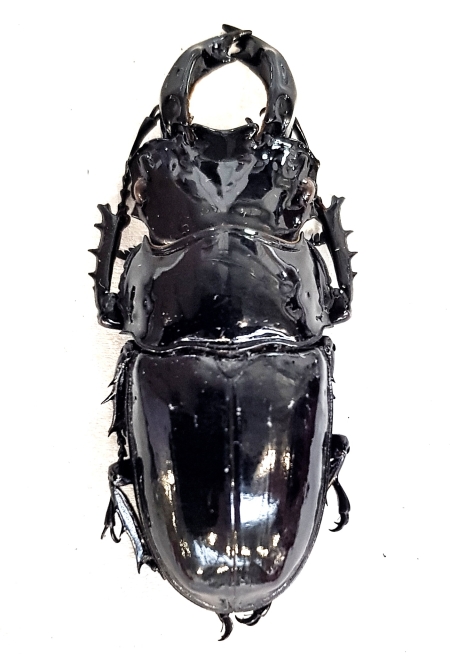 Now although it’s big and showy, beetles can be hard to identify because there are just so many of them and closely related species can be very hard to tell apart.

This one has distinctive elongated jaws that mark it as being one of the stag beetles (family Lucanidae), which narrows it down, although there are well over a thousand species in the family. This one is a little bigger than most and the jaws are relatively unbranched, with a cleft at the end of a relatively squared-off and downward deflected ‘antler’.

Those ‘antlers’ are used by the males to wrestle for access to females, who have much more sensibly sized jaws and are smaller. Effectively they’re doing the same thing as deer and this is a good example of how evolution can lead to similar trends in behaviour and even sexual dimorphism across very different animal groups.

I think this is Mesotopus tarandus Swederus, 1787 which is a species from West Africa that is becoming increasingly popular in the pet trade. It has slightly shorter ‘antlers’ than the other species (or possibly subspecies) in the same genus, M. regius.

As you probably know, I’m more familiar with vertebrate identification than insects, so I was fortunate to have my intern Esmeralda, who is a keen coleopterist helping narrow this down, although I’m pleased to congratulate jennifermacaire who was on the same track with her identification.

Another mystery next week!