For my 250th mystery object I gave you this object from the collections of the Horniman Museum & Gardens to identify:

It gave me a bit of a challenge, but eventually I managed to work it out – and it looks like something similar happened in the comments!

We went from ribs, to hind limbs to jaws, which is where it started getting close to the mark. The suggestion of “Part of the zygomatic arch of something large?” by henstridgesj was on the money.

Allen Hazen broke down the observation a bit further, with an astute observation about the components of the zygomatic arch that are present “The jugal and squamosal components of the zygomatic arch (I’d say its the squamosal that has been cut open here)“. Allen also speculated that it may be from a Dugong – which was my preferred identification for a while.

However, Crispin and henstridgesj worked out that it was from an Asian Elephant Elephas maximus Linnaeus, 1758 – the same species that I had also concluded that it belonged to.

By narrowing down the identification to species I was able to search through the museum’s collections management database to find out whether this sliced-off piece of bone might be part of another object. As it turns out, it was! 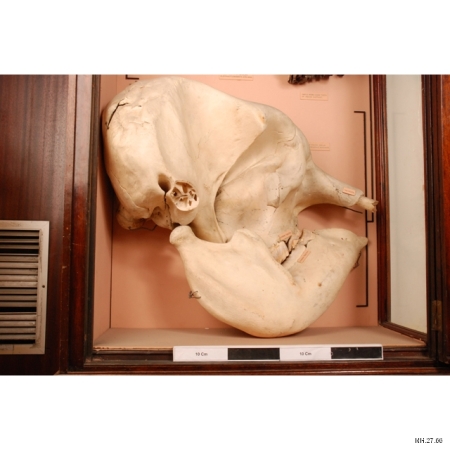 NH.27.66 Elephas maximus on display at the Horniman

So by being able to identify this piece of bone it could be reassociated with the specimen that it originally came from and now there is a record for it in our database, so that if the skull ever comes off display it can be reunited with its cheekbone.