On Friday we had this skull submitted by Dr Ben Swift for identification: 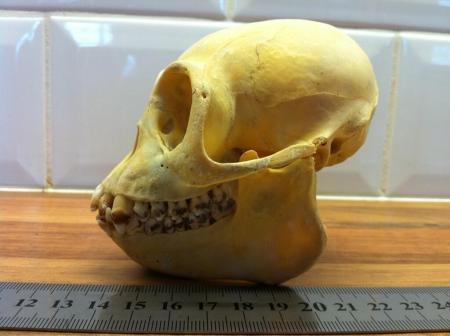 Now this is quite obviously a primate, as it has a bony ring around the orbit, a bony back wall to the orbit and just eight incisors as opposed to the twelve that forms the basal condition for mammals. The teeth also tell us that this is an Old World Monkey (Cercopithecidae), since these primates only have eight premolars instead of the twelve you find in the New World Monkeys (Platyrrhini). The small canines suggest that this is the skull of a female.

From there it starts getting a bit more difficult. The fairly small size of the specimen ruled out a few genera, but the main features that helped narrow down the possibilities were the very flat face, the heavy bony rings around the orbits, the flaring of the zygomatic arches (cheekbones) and the short and rounded braincase. Effectively the only way to consider these features is to look at a lot of comparative specimens (the excellent Mammalian Crania Photographic Archive proved very useful for this).

After a lot of consideration I found myself in agreement with the suggestion of something from the genus  Trachypithecus as proposed by @MarcusChua, henstridgesj, Crispin Wiles and @D0CT0R_Dave. The best comparison I could find was the Silvery Lutung T. cristata Raffles, 1821 although there are other species that I was unable to compare against and henstridgesj may be correct in his suggestion of Ebony Lutung T. auratus É. Geoffroy, 1812.

Despite their names, they even look similar with their fur on, so the easiest way to distinguish between these two species for this specimen would be to know where the skull originally came from, since the Silvery Lutung is native to Borneo and Malaysia whereas the Ebony Lutung is native to Java. Either way, we can be fairly confident that the mystery skull belongs to a Lutung, so a big thanks to everyone for contributing to this crowdsourcing identification exercise!