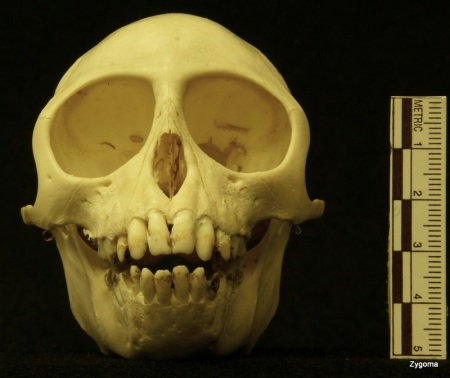 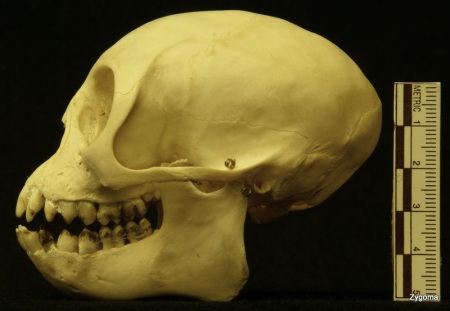 Everyone spotted that it was from a monkey, perhaps unsurprisingly since monkeys have a very characteristic appearance, with a globular braincase and forward-facing eyes. The orbit is enclosed by a solid bony ring and there is a post-orbital wall made up of the sphenoid and ethmoid bones, that produces a cup-shaped eye socket.

But there are a lot of different monkey species – around 286 if you include the Apes (as you should). We can see that this specimen belongs to the Catarrhini clade (the Old World Monkeys and Apes) since it only has 2 premolars instead of the 3 premolars you’d expect in a New World Monkey (N.B. some extinct Catarrhines known from fossils have 3 premolars, so this useful distinction doesn’t actually help define the clade).

The size of the skull and the the shape of the nose region and the mandible isn’t quite right for an Ape, or a typical Cheek-pouch Monkey (like Macaques or Baboons), leaving us with the Colobinae (which includes Colobus Monkeys, Doucs, Langurs, Leaf Monkeys, Proboscis Monkeys, Snub-nosed Monkeys and Surelis).

Once we get this far it becomes rather more tricky to identify what species we’re dealing with (and it doesn’t help that the names are applied somewhat inconsistently), so I must offer congratulations to Jake, jonpaulkaiser, curatorialtrainee, henstridgesj, carlos grau and Steven D. Garber, PhD – all of whom suggested perfectly possible candidates amongst the Langurs and Snub-nosed Monkeys.

This skull is actually from a  Mitred Leaf Monkey or Sumatran Surili Presbytis melalophos (Raffles, 1821).

These small monkeys occur in the Malay Peninsular, Sumatra and Borneo, living in rain forest usually near rivers. They mainly eat fruit and leaves and they live in small groups with one male and several females.

Unfortunately I couldn’t find any non-copyright images of Mitred Leaf Monkeys, but here is a link the ARKive page for this species.