On Thursday I accidentally posted the Friday mystery object for a few moments and in that tiny window of opportunity SmallCasserole managed to correctly identify this organism: 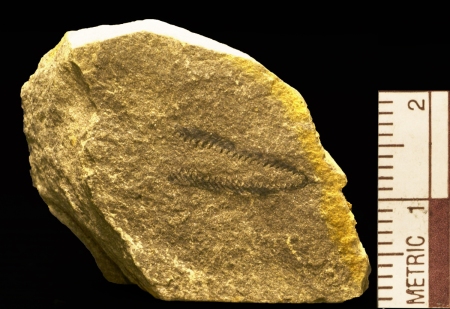 As soon as it was posted properly this object also proved no challenge to several of the other regulars, with David Hone, CopilasDenis, David Craven and Dave Godfrey all spotting that it was a graptolite. Moreover, David Craven managed to correctly identify the species as Didymograptus murchisoni (Beck, 1839). This particular specimen is Ordovician, more precisely it’s 472-464 million years old and it’s from Wales – specifically from Carregwiber, Radnor (grid reference SO085588).

Graptolites were an odd group of animals that went extinct about 380 million years ago, in the Carboniferous. They shared similarities with modern pterobranchs, being filter feeding zooids living in colonies. Unlike the pterobranchs, there were plentiful planktonic forms of graptolite floating around in the ancient oceans, so they were widely distributed and as a result their fossils make useful biostratigraphic markers. The preservation of these fossils makes them look just like they’ve been drawn on the rock hence the name ‘graptolite’, which pretty much means ‘written on rock’ –  so they could be considered to be nature’s graffiti.

In view of the confusion caused by my inability to press ‘Save Draft’ rather than ‘Publish’, I decided to provide an additional mystery object (there is no real logic there – I’ve been busy with writing interpretation text for specimens going on display and was a bit distracted when I made this decision). The extra object was this: 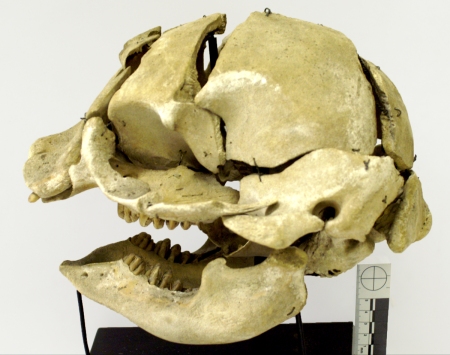 I know it looks a bit like Humpty-Dumpty after the wall incident, but it hasn’t been broken. It’s the skull of an Asian Elephant Elephas maximus Linnaeus, 1758 as correctly identified by CopilasDenis. More specifically, it’s the skull of a neonate (new born) Elephant, as spotted by David Craven, Dave Godfrey and Jake. The reason it looks broken is due to the fact that the bones are unfused. This is pretty standard for young animals, since the bone needs expansion room to grow.