Last week I gave you this specimen from the “Unidentified” drawer in the collections of the Dead Zoo to try identifying:

I don’t think anyone had much difficulty in identifying it, since it is quite a familiar and characteristic skull, but well done to everyone who worked out that this is a European Badger Meles meles (Linnaeus, 1758).

There are two other species in the same genus – the Asian Badger M. leucurus and Japanese Badger M. anakuma, so they also need consideration (skulls of all three species can be seen in this paper by Andrey Puzachenko). However, the Japanese Badger is a smaller and more delicately skulled animal and the Asian Badger can be distinguised by differences in the shape of the region around the bony bulbs that hold the ear bones (called the auditory bullae – in Asian Badgers they’re more obtuse and have a straighter lateral margin).

So apart from the distinction between two members of the same genus, this is a fairly straighforward specimen to identify, it makes me wonder why it wasn’t recognised in the collection? I think there are a couple of factors, which I’ll outline here.

The first is that the lower jaw (mandible) is missing. This is totally normal for almost any kind of animal skull you find, except these badgers, which have a well-developed bony process that locks the mandible into the long jaw articulation (known as the glenoid fossa). 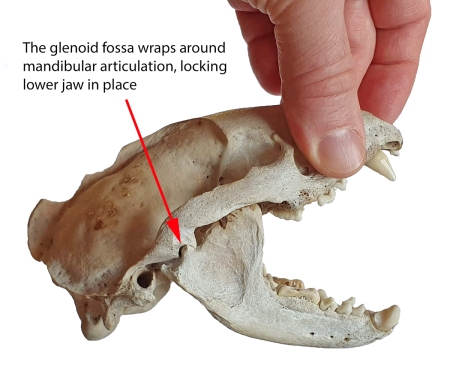 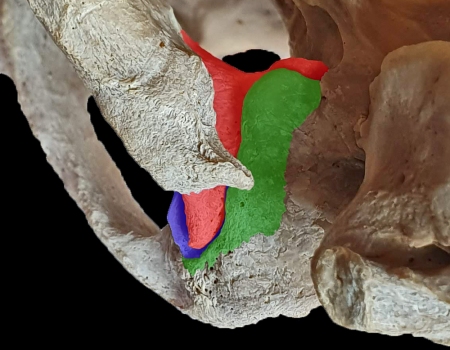 This captive mandible is a dead give-away when you see it, but it does mean that when it’s missing it can be confusing.

A mature adult European Badger like this (as indicated by the well-developed sagittal crest) would also normally have extremely extensive wear on their molar teeth, due to the abrasive grit in the gut of their main diet of Earthworms.

But the mystery specimen has remarkably little wear on those massive molars. This suggests that it probably had a different diet than is usual for a Badger from northern Europe – and no, not mashed potatoes. The same species in southern Europe has a different diet to their northern counterparts, dominated by insects and fruit, so I wonder if the specimen was collected during someone’s holiday to somewhere in the Mediterranean?

[UPDATE 28th April 2020. Several people have kindly shared images of their badger specimens and it seems that the level of wear in my specimen is not as common as I thought. In one discussion the issue of soil type was raised and I think that may play a big factor. This specimen came from Devon, in an area with sandy soil. Other specimens from areas with muddy or silty soils showed much less wear. This may be coincidence, but it would make sense that Earthworms with coarser soil in their gut would be more abrasive to eat and therefore cause more dental wear. That would be fairly straightforward to test using museum collections. If this hypothesis about wear is correct, then the mystery specimen could be from anywhere with soils that aren’t too sandy.]

I hope you found that useful, or at least a bit of a distraction from lockdown. Stay safe!