Last week I gave you this mystery object to have a go at identifying: 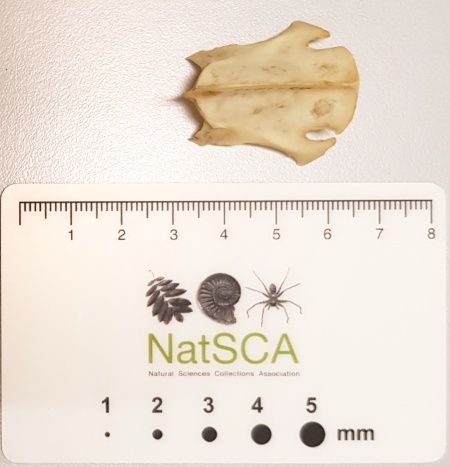 I expected most of the regulars to recognise that it’s a bird sternum, since I’ve talked about them quite a lot in the past – to the point of putting together images of a range of sterna from different bird families to help narrow down identifications: 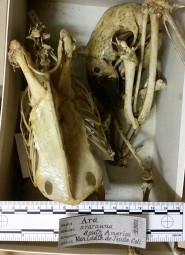 However, this mystery sternum didn’t appear in my gallery, so I thought it would offer a bit of a challenge. Of course, that was before Wouter van Gestel (creator of the fantastic Skullsite resource) recognised it as being from a bird with a fascinating reproductive method based around carefully planned neglect. Yep, this is the sternum of a Common Cuckoo Cuculus canorus Linnaeus, 1758.

Cuckoos are visitors to Britain and Ireland, where they spend their summer holidays destroying the families of host birds (like Dunnocks and Reed Warblers) by removing an egg from the nests of a smaller species and laying their own egg. If the switch isn’t noticed (and most of the time it isn’t) the egg hatches and the Cuckoo chick turfs out the remaining eggs of the host birds, then demands vast quantities of food from the unwitting foster parents.

To help pull off this remarkable feat of irresponsible parenting (or brood parasitism as it’s more properly known), Cuckoos have become remarkable mimics. The male is similar in pattern, colour and flight style to a Eurasian Sparrowhawk – a notable predator of small songbirds.

He hangs around, scaring the host birds off their nest or acting as a distraction, so the female can sneak in and drop off an egg, which itself mimics the colouration of the host bird’s eggs. Different Cuckoos have different species of host bird that they specialise in parasitising, so their eggs are adapted to colour match those host eggs – which is important, since several host species have become wise to the Cuckoo’s tricks and will abandon or destroy any egg they recognise as different.

Reed Warbler nest with what looks like a sneaky impostor egg… Image by NottsExMiner, 2012

Bizarrely, after all this careful disguise and the danger of discovery, the Cuckoo chick that ends up being fed copious amounts of food by the foster parents rapidly becomes a behemoth that could by no means pass as the same species as its hosts, yet the foster parents carry on feeding it.

Reed Warbler feeding a Common Cuckoo chick in a nest. Image by Per Harald Olsen.

It’s remarkable to consider that the complex behaviours of Cuckoos must be entirely genetically determined, since they never meet their parents and never get to learn how to Cuckoo from another member of their own species.

With this as the mystery object, I was delighted last weekend when I heard my first Cuckoo of the year in County Clare – and I was even more excited when I saw one in flight. They may be sneaky destroyers of families, but they are also the heralds of summer in the countryside and it’s hard to not have a soft spot for their evocative call.