Last week I reverted to my favourite topic of skulls for the mystery object, with this specimen: 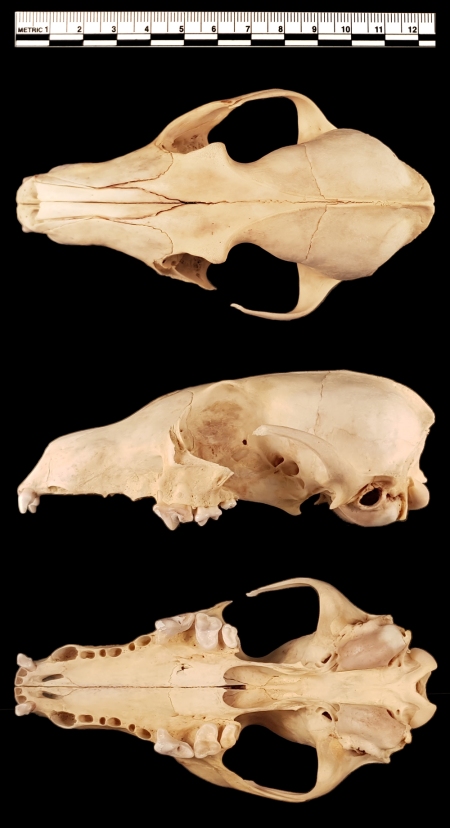 Everyone recognised this as a member of the dog family, but surprisingly few of you pursued it much further than dog or maybe fox.

The small size and lack of a distinct forehead (don’t mistake that bump at the top of the nasal region the head for a forehead by the way, it’s in the wrong place for a dog – see above) says it’s most likely one of the foxes or ‘weird’ dogs rather than a domestic type. By weird dogs I mean Raccoon Dog or Bush Dog type things. 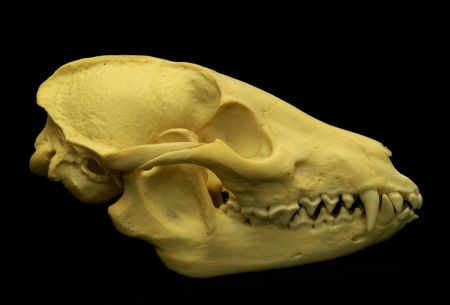 In fact, the bump in the area where the frontals and nasals meet in front of the eyes is not too disimilar to the shape of a Dhole skull (see below), but the size and robustness aren’t right.

After looking through the various dog skulls I could find it became clear that the mystery specimen is smaller than the smallest of the non-weird canids outside those commonly referred to as foxes (which includes canids other than the ‘true’ foxes in the genus Vulpes).

So that helped me narrow down the options to around 20 species which, after checking a variety of online resources, I was able to trim down on the basis of the profile of the skull (especially that frontal/nasal region), the breadth of the muzzle (rostrum if you prefer) and the dentition (the upper second molar is a little smaller than usual and the protocone on the upper 3rd premolar is quite well developed).

In the end there was just one species left and I was delighted that it matched both my expectation and michiganmeetsnewmexico‘s suggestion of Arctic Fox Vulpes lagopus Linnaeus, 1758.

For me the inflated frontal/nasal region hinted at an animal with large nasal turbinates, which are an adaptation to dry and cold conditions, creating a large area in which to heat air that’s being breathed in (to help prevent water in the lungs from freezing) and trap water that would otherwise be breathed out.

If you’re interested in how I narrowed down the species and the resources I used to do it, take a look at my spreadsheet here, which contains my notes and links to fox skull images.

I hope you enjoyed that challenge – there will be another mystery next week!