Last week I gave you this shiny green beetle with white spots (and apparently a penchant for making balloon animals) to identify: 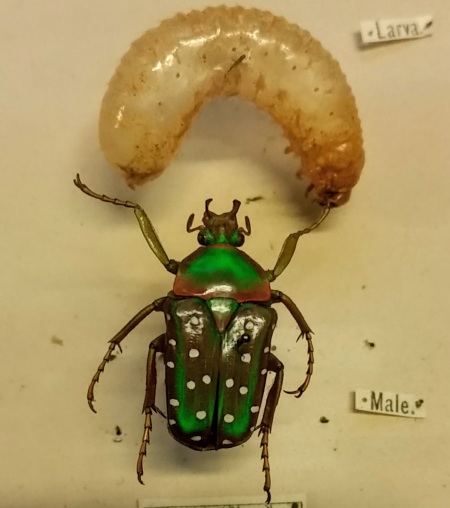 I thought it might offer a bit more of a challenge, but I forgot about Google. It turns out that a Google Image search using the key distinguishing features provides some useful images to compare, making this easier than I expected.

As palfreyman1414 correctly recognised (followed by many others), this is the Spotted Flower Beetle Stephanorrhina guttata (Olivier, 1789).

Of course, when dealing with historic museum collections things are never quite that simple, so the specimen on display is actually referred to by the genus name Ceratorrhina which isn’t recognised today. Ceratorhina was synonymised with Cyprolais, which is a subgenus (containing the Horniman Beetle) that’s in the genus Eudicella.

Of course, that means that this specimen may have been named incorrectly in the first place, since I’ve seen nothing to suggest that Ceratorrhina has been directly linked to beetles in the genus Stephanorrhina which sometimes carry the synonym Aphelorhina in older collections information.

It would be interesting to work out how the incorrect name was applied to this display specimen, but I have an inkling that there was once a rogue curator who just liked to cause taxonomic trouble…