Last week I gave you this unassuming bit of bone, that I found with no identification in the Grant Museum of Zoology stores: 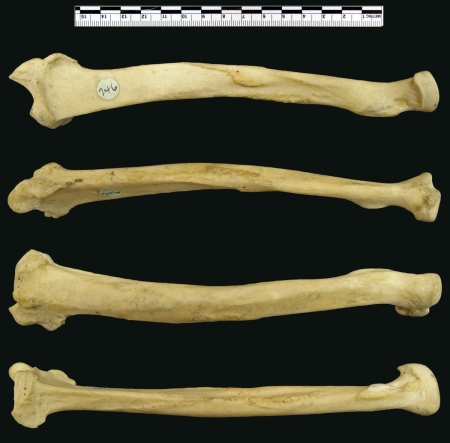 Daniel Jones and Daniel Calleri identified the element as a radius, but beyond that there was a general feeling that identification of species was a bit on the tricky side. Palfreyman1414 pointed out that it’s something approximately human sized, with Lena ruling out an ungulate, suggesting that it could be from a carnivore or possibly a marsupial.

I must admit that my mind immediately went to carnivores and I initially thought it could be from a Black Bear, since it’s fairly robust and about the right length. However, after checking the ever helpful Adams & Crabtree book I realised that bears are even more chunky than this.

It didn’t look right for a dog since they are straighter, have a flatter profile and a narrower distal end. However, it did look right for a big cat and I’m fairly certain that it’s from a Leopard Panther pardus (Linnaeus, 1758). If you want to compare a Leopard with a Dog radius you can see them compared in this paper, along with a good description of the bones of the Leopard forearm.

A bit of a tricky challenge – so next time I may try to do something a bit more distinctive!