Last week I gave you this distinctively weird looking skull to identify:

As I suspected, many of you worked out what it was straight away, but I wonder if it would have been as easy if the side view hadn’t included the mandible?

The upper dentition, especially the pair of incisors, is somewhat similar to that of a rodent, but that mandible is ludicrously massive and could only really belong to the weirdest primate in the world: the Aye-aye Daubentonia madagascariensis É. Geoffroy, 1795

The Aye-aye’s incisors are an adaptation for gnawing holes in wood to get at grubs inside. It finds these tasty morsels using a tapping finger and crazy bat-like ears to detect the tunnels the larvae create when feeding, with a system a bit like seismic ground response analysis. 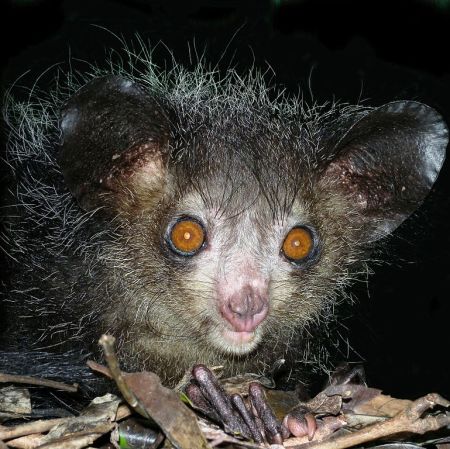 Once the squishy prey has been detected and an entry point has been gnawed, the Aye-aye fishes it out using a specially adapted long, thin finger with a hooked claw.

Basically, the Aye-aye feeds rather like a woodpecker, but with the benefit of fingers and teeth. Perhaps it’s weird, but it’s most definitely wonderful!