Last week I gave you this slender bone to try your hand at identifying: 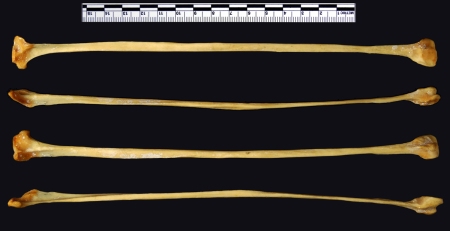 You didn’t have much to go on, but most of you recognised that it’s a fibula (well spotted Ric Morris, Kevin, Mieke Roth and Flick Baker) and I was impressed by the variety of clever clues used to communicate that knowledge. However, Michelle went a step further and identified this as being from a large felid, in the size range of a Mountain Lion, earning loads of bonegeek points.

It took me a little while to work out what this was myself, since it was in a box with Ostrich bones and my first thought was that it might be from another bird. It has articulations at either end and a long midshaft, so it was obviously one of the long bones, but it’s very slender and wouldn’t be able to carry much weight on its own, so it was either a radius or fibula.

I started by looking at the radii of a some large birds, like Albatross and Flamingo. However, on comparison with a few specimens it became obvious that I was looking in the wrong area, since the articulations didn’t fit with those on a bird radius at all. They also didn’t fit the shape of any mammal radius I could think of, so I started considering fibulae.

I knew it couldn’t be a bird fibula, since they are fused with the tibiotarsus and would lack an articulation at the distal end, so I started looking at mammals. It was a bit slender for a dog, but pretty similar to a cat, if on the big side.

Then I remembered that I had a box of postcrania from the same collection as the Ostrich that this bone shared a box with. So I checked the mystery object against that and was pleased to find that there was only one fibula in that box, it was from the other leg and it was a mirror image. So it looks like this bone has not only been identified, but reunited with the Cheetah Acinonyx jubatus (Schreber, 1775) skeleton it came from!