It seems like an age ago that I gave you this mystery object:

There were fantastic comments from everyone, but I’ve been bad about responding and writing an answer because I’ve been pretty swamped recently. Also, there are several things that confuse me about the specimen and I’ve not had the chance to take a really good look at comparative material.

The function of the object was correctly identified by Daniela, Paleotool and Jeanie – it is a bone whistle, in this case a fairly modern Navajo example. Our Keeper of Musical Instruments was keen to know if this was from an eagle and whether it might be covered by CITES.

At first I thought it might be the femur of one of the large American eagles, but it is far too long. If it was from any bird of prey it would be a Californian Condor based on the size but the tapering shape is wrong. I then considered the humerus – which is a better match for size, but the position of the groove for a tendon path on the underside is wrong. So it doesn’t seem to be from an eagle.

The slight curve and taper rule out a hollowed deer metapodial, which are very straight and uniform in width.

My best guess is that this may made from a section of the humerus of a species of swan – a guess partly informed by the opinion of the anatomical knowledge of Wouter van Gestel and the archaeological knowledge of Paleotool. The shape and few remaining anatomical features are about right, but there are other large birds that haven’t been ruled out.

Perhaps an unsatisfactory answer, but sometimes a good solid “I don’t know, but it’s reasonable to think it might be this” is the best answer you can get. Thanks for everyone’s input! 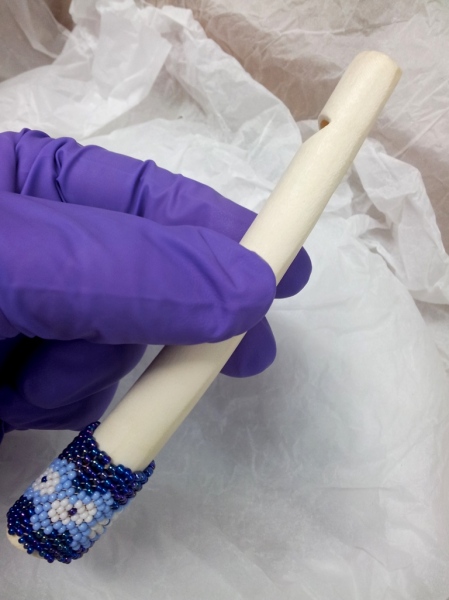