On Friday I gave you this weird-looking object to identify: 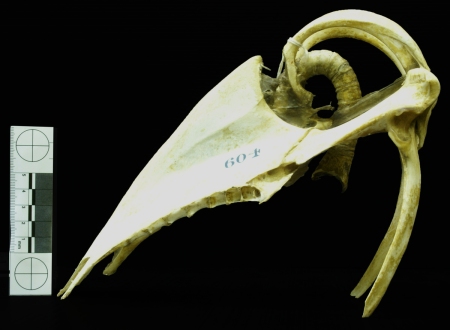 Steven D. Garber, PhD jumped straight in with the correct identification of what it is – the sternum keel and trachea of a bird. The more tricky part was working out what bird it came from. Dave Godfrey suggested that it was a large bird, possibly a gull, while Zinjanthropus suggested that it might have belonged to a Trumpeter Swan, with support from Carlos Grau (who suggested it could also have been from a pelican). Jonpaulkaiser proposed that it came from a penguin,  a suggestion seconded by Dave Godfrey on the basis of the shape.

So the identification became divided between the swan camp and the penguin camp. Jake joined the swan camp (bringing Zigg with him) and provided a link to a great piece by Darren Naish on his Tetrapod Zoology blog, which focussed on the bizarre tracheae (and sterna) of some birds – including swans, which related to the observation by Zinjanthropus:

Is it a trumpeter swan? They have large, convoluted trachea that goes through the sternal keel so that it can act as a resonating chamber.

It turns out that the swan  camp had the right of it, this sternum and trachea did in fact belong to a Tundra or Whistling Swan Cygnus columbianus columbianus (Ord, 1815). Whistling Swans are a close American relative of the Bewick’s Swan that we get in Europe. They nest in the Arctic during the short summer months and then fly south for the winter, making a  distinctive call in flight that is higher in pitch than the calls of the Trumpeter and Whooper Swans – which is probably where the name “Whistling Swan” came from.

I am now intrigued about penguin sternum shape, so I may well see if we have some in the collection so I can do a comparison. Sternum shape is actually something I am rather interested in across birds, particularly with regard to the biomechanical function they serve in different flight strategies (in the air or underwater as in the case of the penguin). If I find a comparative  specimen I will pop it up here with a bit of discussion.

That leaves me to offer congratulations to team swan and commiserations to team penguin. I’d better go for something a bit more cultural this week, after offering false promises last time.