I thought I’d do a quick update on rhinos here on Zygoma, since the theft of their horns from museum collections is something that I’ve been keeping an eye on for a while.

For the museum professionals out there it has been tough, with more thefts taking place since I published on the situation from a museum perspective at the end of 2011. On a more heartening note, there have been more arrests as well.

Of course, things have been far tougher on the rhino populations.

Poaching rates in South Africa show a steep increase since 2009, when the new wave in poaching was started after a rumour that a Vietnamese official was cured of liver cancer using powdered horn. It will be interesting to see whether the increase in poaching rate will follow the trend of the last few years, following the recent arrest of a man reputed to be one of the kingpins of the poaching and smuggling operation from South Africa. 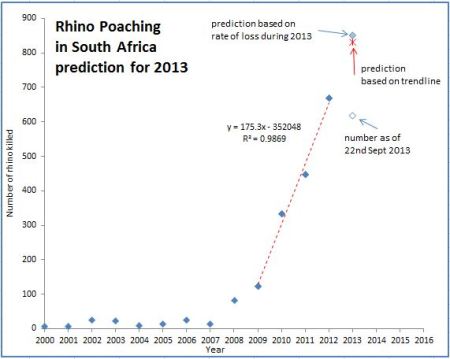 Since the boom in poaching, rhino populations have been in decline around the world. In some cases that decline has been very rapid. In 2011 the Western Black Rhinoceros (Diceros bicornis longipes Zukowsky, 1949) was declared extinct and the Javan Rhinoceros (Rhinoceros sondaicus Desmarest, 1822) now only has one surviving subspecies, made up of maybe 40 individuals. All of this because of a single story about cancer.

As with most anecdotal claims for cancer cures (from use of vitamins to homoeopathy) there is no good evidence that rhino horn has any effect. Spontaneous remission happens and, assuming the story about the Vietnamese official contained any shred of truth there were probably numerous other treatments being used at the same time, making it impossible to identify which treatment had any effect.

If rhino horn was effective, then you might expect the countries that use it, like China, to have a lower cancer mortality rate than other parts of the world – but this is not the case. Even practitioners of Traditional Asian Medicine have explicitly stated that there is no evidence that rhino horn can cure cancer.

Moreover, if rhino horn did have any effect on a cancer, that effect should also be found by using powdered cattle hooves – a cheaper and more sustainable product. Rhino horn use is not sustainable at all. If the poaching rates continue to increase as they have been, my very quick and dirty calculations suggest that rhinos could be extinct in South Africa in as little as 10 years. 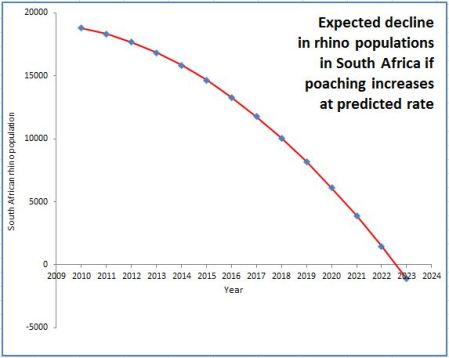 This is why it’s so important to raise awareness of the problems facing rhinos and communicate the fact that rhino horn is not a cure for cancer. Time is potentially very short for the populations that remain.

I know I’ve discussed the situation regarding rhino horn before, but I recently had an article published in NatSCA News that goes into a bit more detail about the thefts of rhino horn from collections in Europe, the current status of rhino populations in the wild and the huge increase in levels of poaching. I thought it might be useful to share the article a bit more widely by making it available here: The Horns of a Dilemma: The Impact of the Illicit Trade in Rhino Horn.

Normally NatSCA News articles are published online a year or so after they are published in hard copy, but the article I wrote will be out of date by then and I will have to spend the next year or so getting annoyed by newspaper articles talking about the market for horn as an aphrodisiac (which is nonsense), without being able to easily share the results of my research into the subject.

One element of my research has been a map that shows the places in Europe from which rhino horn has been stolen in the last 18 months or so (I will keep updating it):

The situation for rhinos is bad and it’s getting worse.

Today is World Rhino Day. It is a day for raising awareness about the threats to the future survival of the five species of Rhino in the world today.

Historically Rhinos have been hunted for their horn – which has been made into trophies in Europe, into high-status jambiya handles in Yemen and into intricately carved libation cups in China.

Today, despite the fact that Rhinos are protected by international law, which makes it illegal to trade in modern and unworked antique horn, there is an active black market for Rhino horn in parts of Asia (mainly in Thailand, Vietnam, China).

This market is mainly driven by demand for horn used in Traditional Chinese Medicine (TCM), particularly following recent (totally spurious) claims that it can treat cancer (N.B. it was never used as an aphrodisiac in TCM).

In reality the horn has no more health benefits than cow horn or even fingernails, since it is composed of the same material – keratin. Unfortunately this fact has done little to stop the demand for illegal Rhino horn.

Actually, much of the demand is probably artificial, driven by wealthy businesses stockpiling horn against future shortages as Rhinos disappear (as identified in this report on Taiwan from 20 years ago). Their actions have made the average Rhino horn worth more than a 24-carat gold ice-cream cone filled with the highest grade cocaine.

So far this year 287 Rhinos have been illegally killed for their horn in South Africa alone – a figure closing in on last year’s all time high of 333. Many of these Rhinos have died from the process of having their horn removed using a chainsaw, which cuts through the flesh and bone of the end of the skull.

On top of this bloody harvest, the demand for Rhino horn has led smuggling cartels to seek alternative methods of getting hold of horn.

These have ranged from using Thai prostitutes to pose as legal game shooters (I kid you not) to acquiring historic horn through a legal loophole.

The biggest surprises came in a sale of rhinoceros horn carvings, in which 30 lots, estimated at $3.9 million, sold for $30 million. (example of black market influence on Rhino horn value in art sale, from The Telegraph, 31st May 2010)

When it was noticed that Asian buyers were paying well over the odds for antique Rhino horn the loophole was closed, but by then historic horn had become well established as a commodity and therefore attractive to the criminal element involved in the Rhino horn trade.

This led to several thefts of horn from South African museums in 2010 and European targets started being hit from February 2011. Since then there has been a spate of 30 or so thefts of horn from museums, auction rooms and historic houses around Europe. These thefts have led many museums, including the Horniman, to take their Rhino horn off display and move it into secure storage.

The Natural Science Collections Association (of which I am a committee member) has provided some guidance to museums about Rhino horn in collections and somehow I’ve found myself giving interviews to the Museums Association and the BBC about this issue.

In the face of all the depressing Rhino horn developments over the past couple of years, it’s been heartening to see politicians and even Traditional Chinese Medicine educators backing the moves to dispel the myths about Rhino horn as a cancer medicine.

I must also admit to having a (slightly guilty) sense of schadenfreude when I think of the nasty chemicals that have been used to treat Rhino horn in museums over the years (including arsenic and mercury).

Risks aside, there are still rich people who will naively use ‘medicines’ that they don’t understand, but which they put their faith in anyway (Elle Macpherson for example).

So the situation looks bleak for the future of Rhinos, unless misinformation about medicinal effects of their horn can be overcome and the demand for illegal horn removed.

Pdf fact sheets on all 5 Rhino species from http://www.rhinoconservation.org: