Last week I gave you this taxidermy bird to have a go at identifying:

It’s fairly obviously a duck of some sort, but there are almost 150 species in the duck family Anatidae, so that’s not really enough information.

Of course, the ornithologists were up to the challenge of working out which type of duck this was, with Wouter van Gestel dropping hints at a Steamer Duck. If you’re not familiar with Steamer Ducks, they are in the genus Tachyeres, there are only four species and they all live at the southern end of South America.

Of the four species, only one (the smallest) can fly. The others are very large, heavy and flightless. They sometimes use their small wings as a power assist in fast swimming, using a style reminiscent of an steamer ship’s paddles – hence the name.

The small wings on this specimen, as pointed out by Allen Hazen, suggest that this is one of the three flightless species, ruling out the Flying Steamer Duck T. patachonicus as a possible contender.

The three remaining species are all very similar and although some images online suggest that only one species has an orange bill, they all have quite a bright yellow-orange bill following their moult that becomes duller over time. Of course, when dealing with taxidermy you can’t fully trust things like leg or bill colour as they can rapidly fade after death and they are usually painted to give an impression of the natural colour – sometimes with a bit of artistic license.

This particular specimen is identified as Tachyeres cinereus, which is not a valid species, so I was hoping there would be someone with a useful morphological hint to help distinguish between species, but most ways of distinguishing rely on comparisons of bill length, mass and size.

However, this specimen does have a collection locality – the Falklands. There are two species of Steamer Duck that occur on the Falklands and fortunately one of them is the species that flies and has already been ruled out, so it seems likely that this is a Falkland Steamer Duck Tachyeres brachypterus (Latham, 1790). 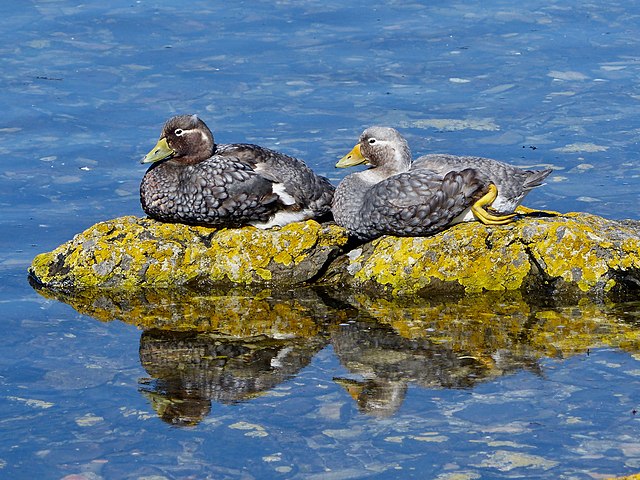 So well done to everyone who said it was a Steamer Duck – I think that’s about the best identification possible from the information provided!

On an unrelated note – over the next few weeks my mystery object answers may be a bit on the brief side. Projects at the Dead Zoo are underway that are taking up a lot of my time, so I may struggle to find time for detailed answers. If you’re interested in what I’ll be doing you’ll be able to check out the #DeadZooDiary hashtag on Twitter and Instagram, which we’ll be adding things to starting next week. Exciting things are underway!