Last week I was a bit mean and gave you a really difficult mystery object to identify: 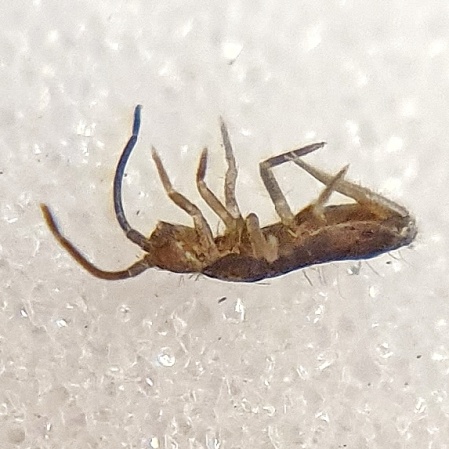 I say it’s difficult, but that’s only if you wanted to get the species, which is probably impossible to do with certainty from just this photograph. But, if you don’t mind sticking to the broad taxonomic group, then it’s fairly straightforward.

That funny-looking tucked-in tail-like appendage with the bifurcation at the tip shows that this is very clearly a springtail or Collembola. These tiny, six-legged, insect-like, arthropods are hard to spot, but they’re all over the place.

This particular specimen was found on a coconut that had been washed up on a beach on the West Coast of Ireland and which was offered as a gift to the Dead Zoo. As the name implies, the Dead Zoo is Zoological (although we do have Geology collections too), so the coconut went to the National Botanic Gardens. We froze the coconut before sending it on, just to make sure no pests accompanied it, and we kept any of the hitchhikers we found – which included this springtail.

The closest I managed to come with an identification relied on the general body shape plus the fact that the 3rd segment of the antennae is longer than the other segments. From online resources I figured this to be Tomocerus sp. possibly Tomocerus minor (Lubbock, 1862) at a push. A proper analysis using the FSC Key to the Collembola would probably help.

It turns out that in the comments Zoobooks and Tony Irwin were of a similar opinion – and I’m fairly sure that Tony knows his springtails quite well, so I’m hoping I interpreted his curly-horn clue correctly!