Last week I gave you this funky fossil from the National Museum of Ireland to have a go at identifying: 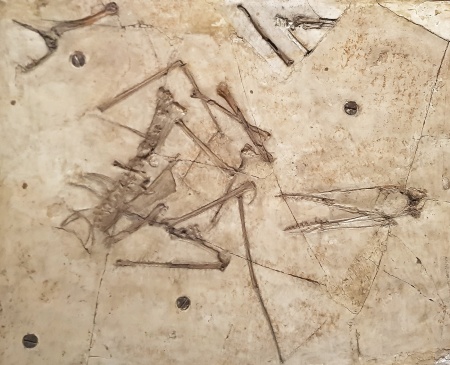 Everyone in the comments immediately recognised that this is the fossil of something that flies, thanks to the slender bones. The general consensus from the outset was that it was Archaeopteryx, but I wonder how much of that is because this specimen is preserved in the same Middle Jurassic lithographic limestone from Solnhofen that preserves the first bird? 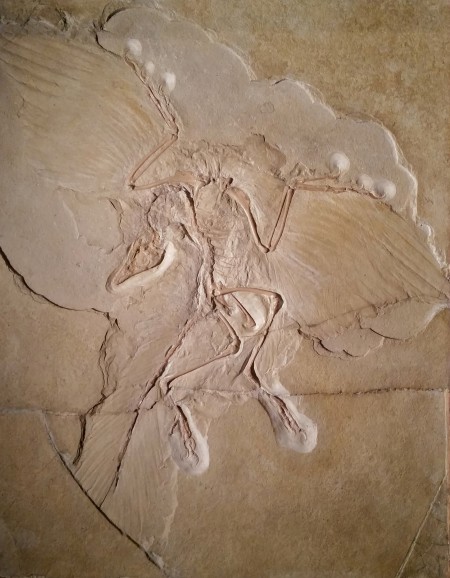 However, Allen Hazen noticed the long slender finger that marks the mystery object as something different, when he correctly suggested that it was a pterosaur, winning over palfreyman1414 and sallie reynolds. On Twitter, @Robertgagliano1 went one better and got the correct genus when he suggested Germanodactylus.

This is indeed a fossil of Germanodactylus cristatus (Wiman, 1925). These small Jurassic pterosaurs were about the size of a raven and it is thought that they may have fed on marine crustaceans and molluscs, based on their fairly robust teeth.

This particular specimen is currently on display in our Jurassic Skies exhibition (that I talked about a fortnight ago), as it helps represent the successful group of flying reptiles that were already in the air 150 million years ago, when feathered dinosaurs first took to the skies.

In an unexpected twist, research was published just a week after we opened the exhibition, describing the first evidence for feathers in pterosaurs. This was unexpected, although fur-like filaments had already been recognised in the group. This means it’s possible that feathers originated in a common ancestor of dinosaurs and pterosaurs – which may have even included the group that is today represented by the crocodiles.

This means it’s possible that the ancestors of crocodiles would have been feathered and modern crocodiles have lost this covering, possibly thanks to their specialisation for living in water. I find it quite interesting that a reticence to add feathers to representations of dinosaurs (in things like Jurassic Park) has been influenced in part by the scaly skin of modern crocodiles (the nearest living relatives to dinosaurs that are not birds), but now we find out that crocodiles may have had feathers and lost them, making prehistory a much more fuzzy place than we ever dreamed!