Last week I gave you this beach-loving little bird to try your hand at identifying: 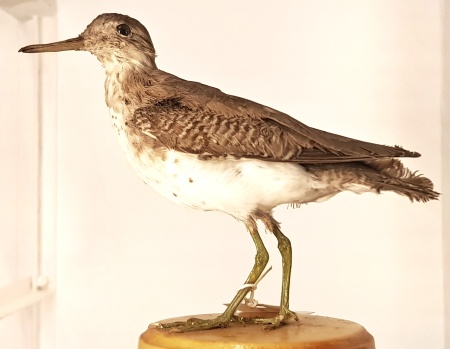 I had a feeling that one or two of you would know exactly what it is, while others would have a pretty good idea of the type of bird, but not the species, since there are quite a few birds on the world’s shorelines that look something like this.

The Waders are a clump of groups of shore birds in the Order Charadriiformes (which also includes non-waders, like Gulls) and the small to medium sized waders, with long straight bills like this one, are mainly in the Family Scolopacidae or Sandpipers (nicely suggested by palfreyman1414 with the cryptic clue “a silicaceous rat enchanter“).

However, there are quite a few species in the sandpiper family – around 80 in total – so there’s still quite a lot to choose from. However, the small size, brown upper parts, white underparts with some spots (only in the breeding season), yellowish legs and bill with a dark tip all point to a widespread wader from North America – the Spotted Sandpiper Actitis macularia (Linnaeus, 1766). 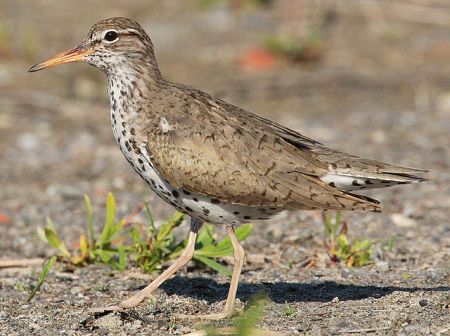 Although this species is from North America, the specimen was actually collected in Ireland – in Finnea, County Westmeath to be more precise. As migratory birds they can sometimes crop up quite a long way from where you’d expect to find them, especially following big storms. Without the spotted breeding plumage it would be very hard to distinguish the specimen from the Common Sandpiper that occurs in Europe, as they are very similar looking birds, apart from the spots.

So well done to Wouter van Gestel, jennifermacaire, and palfreyman1414 who managed to recognised the species, despite the taxidermy being a little jaded.

There will be another mystery next week.