Last Friday I gave you this rather beautiful object to have a go at identifying: 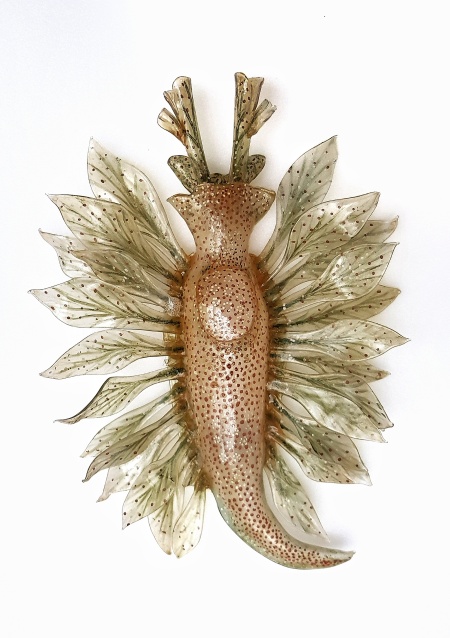 I thought it might prove fairly easy for some of you and I wasn’t disappointed. Both in the comments here and on social media there were lots of you who managed to work out what this is, largely from images or illustrations of the model that could be tracked down online.

This is a glass model of a sea-slug made by the Blaschka father-and-son team of lampworkers, who were based in Dresden in the second half of the 19th Century. They made a huge number and variety of models of marine organisms, based on illustrations they found in a variety of scientific publications, which they adapted to enable reproductions in glass.

Design illustration of Beccaria tricolor by Leopold Blaschka. From the collection of the Corning Museum of Glass and Digitized by Boston Photo Imaging May 2011

This particular specimen has the number 373 on its label, which corresponds with the number on the Blaschka design illustration above, so we can be confident that the design is for this model.

Label for the specimen – note the National Museum of Ireland – Natural History (NMINH) number which starts with the year the specimen was acquired. This specimen arrived in August 1886 and cost the fairly modest sum of 3d (for  some context, an average UK farm labourer’s weekly wage in 1886 was 13s 4d*,  which would be enough to buy 53 of these models).

I should probably say the design is for this type of model, since the Blaschkas produced multiple versions of each design. These sold all around the world to museums and universities, who ordered them from a catalogue to be used in display and teaching in lieu of real specimens, which would often look like nothing more than tiny grey lumps once preserved in alcohol.

To give you an idea of what these creatures look like alive, here’s an image of an undetermined species of Caliphylla 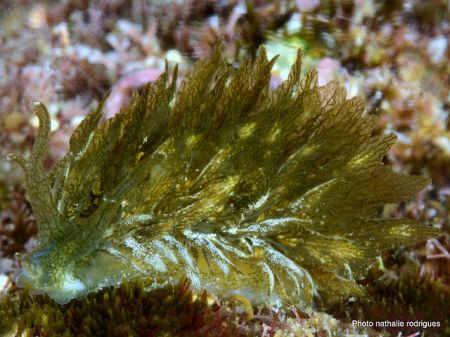 As you might imagine, as soon as you take one of these animals out of water their complex frills start to stick together like a piece of damp fancy lettuce and it becomes hard to see their leafy structure.

And they really are leafy, because Calliphyla is one of the solar-powered Sacoglossa sea-slugs that steal chloroplasts from algae, which they then store in their bodies and can use to obtain energy from the sun. So all those leafy bits are a result of convergent evolution with plants, providing a large surface area for light to reach the chlorophyll. This means they also end up being well camouflaged against predators, although they may get nibbled by the occasional confused herbivore.