Last week I gave you this part of a skull to have a go at identifying:

It’s quite a distinctive structure and very particular to one particular group of mammals. It is of course an external auditory meatus (or ear hole as it’s more commonly known), but instead of opening directly into the auditory bulla (the inflated bony bulb that holds the ear bones) it has a long and robust tube.

Lee Post, Daniel Calleri & Dan Jones and Allen Hazen recognised this characteristic feature as belonging to a Beaver and Richard Lawrence went one better and narrowed it down to Castor canadensis Kuhl, 1820 – an identification that I agree with having seen the whole skull:

I’m not sure if there’s any real functional reason for the ear tube, but it looks to me like it might be a “spandrel” a feature that’s an artefact of another adaptive feature – in this case the articulation of the mandible. 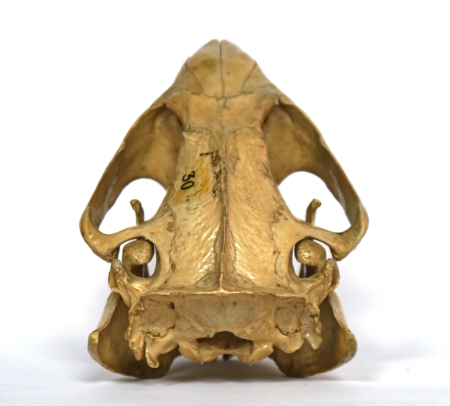 Gnawing through a tree trunk is no easy task, so it’s not surprising that the Beaver has some serious adaptations to deal with the work involved. Unlike carnivores, which have a fixed lateral mandibular articulation powered mainly by the temporalis muscles, rodents have a dorso-ventral articulation usually powered by the masseter muscles, which allows the jaw to move backward and forward. In the Beaver the sagittal crest suggests that the temporal muscles are more involved than usual which, with the orientation of the articulation, may necessitate the ear tubes as lateral braces against which the mandible can secondarily articulate. That’s my guess…