Recently there has been a storm of speculation about the identity of ‘humanoid’ remains found in the Chilean Atacama desert in 2003.

The specimen was acquired by the Disclosure Project and has been under investigation by researchers at Stanford University in an effort to categorically confirm or reject the possibility of it being the remains of an alien.

On 22nd April the preliminary results were released, concluding that the specimen is human, but that despite the tiny size (~6 inches) it was thought to be a child  aged between 6 and 8 years old with a variety of unknown medical conditions, rather than a foetus. This seems quite remarkable to me, since I’ve dealt with skeletal foetus specimens rather similar to this in museum collections. 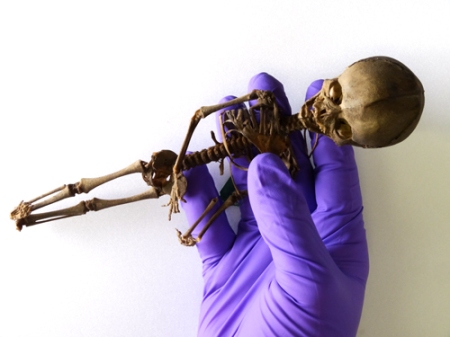 Skeleton of foetus with estimated age of 18-20 weeks

The main differences I can discern by looking at the high quality photos, X-rays and CT scan on the Sirius Disclosure website are that the Atacama specimen is from a slightly earlier stage foetus (discussed below); it has mummified soft tissue that has shrunk tight (discussed below), pulling the ribcage into a more narrow configuration; and the head has been distorted, probably as a result of an illegal back-street abortion where a hook has been used to extract the foetus (discussed below), causing damage to the back of the skull and stretching the pliable head.

[Edit 07/05/2013: In the comments below, a contributor called Fred links to an image of this specimen where the large hole in the head is absent. Presumably the large hole was made while taking samples for testing.

There are other parts of the skull where a hook may have been inserted, causing the cranial deformation seen, such as through a fontanelle, but this is hard to confirm from the images available, so this makes the case for an abortion using a hook less likely. Abortions in the region are often carried out using an unknown mixture of herbs and it is possible that the deformation seen was caused by forceps used to facilitate extraction or as a result of post mortem tight wrapping of the specimen]

When undertaking an evaluation of something unusual like this, it is important to consider a range of factors, from the context of the specimen to how the evidence is balanced and what relative weighting should be applied to particular lines of evidence.

In this case the age estimate provided by Dr. Ralph Lachman has perhaps been overly influenced by the high density of the bone in the x-rays of the specimen (a pdf of his report can be seen here). In mummified specimens there is a well recognised increase in the density of both bone and cartilage to x-rays, to the point that age determination becomes unreliable (pdf of report on Egyptian child mummy detailing complications in age determination).

When this factor is taken into account, the specimen can be considered in a different light.

The length and degree of development is consistent with a 14-16 week old foetus, where the bones have mostly formed and are starting to harden, the skin is transparent and the external genitalia are formed, but the fingernails, eyelashes and eyebrows have not yet formed.

This would explain not only the very small size, but also why there are only 10 pairs of ribs, as the lower ‘floating ribs’ – the ones you can see partially developed in the skeleton of the older foetus below – wouldn’t have yet formed. It would also explain why there is no evidence in the x-rays of the deciduous or unerupted permanent dentition that you would expect to find in a 6-8 year old. 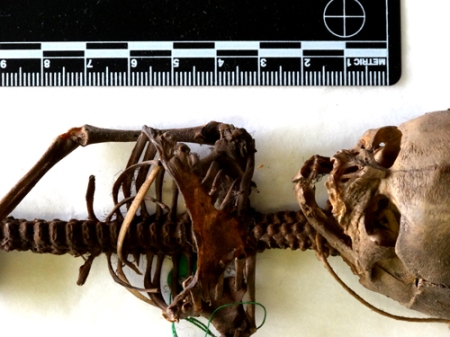 Skeleton of foetus with estimated age of 18-20 weeks

Looking at the wider context of the find, Chile has some of the most restrictive abortion laws in the world. This means that illegal abortions are common in the country, with the third highest rates of maternal mortality in the country being as a direct result of complications arising from an illegal abortion. The ways in which these complications can arise are horrific, as must be the circumstances of any woman who decides to risk them in order to terminate an unwanted pregnancy. This isn’t the kind of decision to be made on a whim.

Nonetheless, it appears that some unfortunate woman underwent the procedure and the aborted foetus was disposed of in a remote location in the Atacama desert, only to become dried out, discovered and made the focus of study.

This brings me to the media handling of the reportage of the specimen. The preliminary results of the study clearly identify the specimen as a young human being (even if I disagree about the age range reported). It is also clear that the specimen is relatively recent and not of great antiquity; so why have papers like the Sun and Daily Mail taken the decision to sensationalise the story, rather than treat it with the respect that it deserves?

This is utterly unlike their reporting of the human placenta found in Tooting in March (Sun, Daily Mail) or the Sun’s analysis of a television broadcast of an abortion, or the slew of articles from the Mail’s apparent obsession with abortion.

It almost seems as though the Atacama specimen was deemed undeserving of respect because it’s considered a “freak” or “mutant”, but I fail to see how the specimen deserves any less respect than any other innocent dead human being. I wonder if the more prosaic story of the dumped outcome of an illegal and unsafe abortion, carried out on a desperate woman who may not have survived the procedure, would have gained the same attention that the story of a purported “alien” or “freak” has garnered. It saddens me to say that I rather doubt it.

246 thoughts on “Atacama ‘alien’ mystery is no mystery”