Apologies for the late posting of the mystery object answer today, I didn’t get a chance to write it yesterday because I was at the second film in the CinesSci6 series at Clapham Picturehouse.

Back to the mystery object: 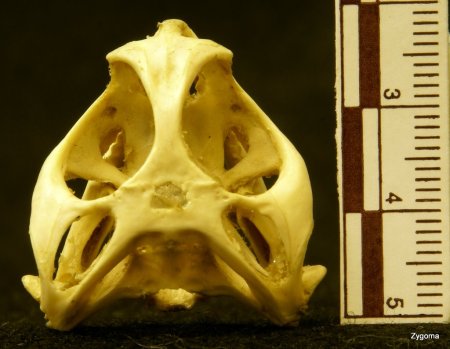 I asked you to identify this skull and as usual you did a great job.

Everyone figured out that this skull was from a ‘reptile’ of some sort and after some discussion about similarities between this skull and that of a Tuatara there was a correct identification to the genus level by ObenedO, which was seconded by henstridgesj. This is the skull of Uromastyx harwickii Gray, 1827 the Indian Spiny-tailed lizard.

These herbivorous lizards live in burrows in desert areas. They are preyed upon by various birds, from falcons and eagles to egrets.

The lizard’s spiny tail is often discarded by predators despite being full of fat, making me wonder why the lizards aren’t spiny all over.

The fat in the tail is considered to be an aphrodisiac by some and the whole animal is supposed to be quite tasty, so these little lizards have a pretty hard time of things. That said, at least they don’t seem to be at risk of extinction, unlike so many other animals in the world today.