Last week I gave you this mystery mandible from a cabinet in my office, that I discovered while clearing things out:

I was a hotly debated mystery, with some very interesting discussions in the comments between salliereynolds, Allen Hazen and palfreyman1414. This narrowed the identification down from carnivore, to mustelid, to otter, to a final suggestion of European Otter Lutra lutra (Linnaeus, 1758) by Allen Hazen. 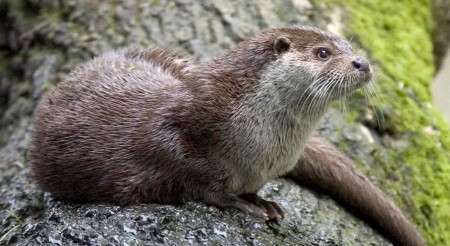 This was the same conclusion that I’d reached and it’s always nice to get a second independent opinion that agrees. I’ve seen quite a few otter jaws (in fact I’ve had two otter mandibles as previous mystery object – one was from an Asian Short-clawed Otter and the other from the same species as this one).

This now gives me what I need to go looking to see if there’s a European Otter cranium that’s missing a mandible, so I can see if this one fits. That still might be a bit of glass-slipper type situation, as we have quite a few European Otters in the collection. Ireland is a bit of an otter stronghold and I’ve even found one dead in the road right in Dublin, near one of the canals and less than a mile from the Museum.

Sadly I’ve not yet seen a live one in the wild, and even when they are around they tend to keep a low profile and are normally only known because of their distinctively fishy spraints left in visible locations.

On that slightly fishy note I will leave you until next week!