Last week I gave you this unidentified skull from Dublin’s Dead Zoo to have a go at identifying:

It didn’t prove too difficult to narrow it down, with everyone recognising it as a mustelid and Rémi immediately recognising it as being one of the Martens. But salliereynolds and Chris managed to get it down to the species, which is a bit of work.

There are around seven living species in the Genus Martes, although the total number varies depending on the sources you read. They have very similar skull shapes, the same dental formula and very similar tooth shape. In my experience the main feature to differentiate them lies in the auditory bullae. 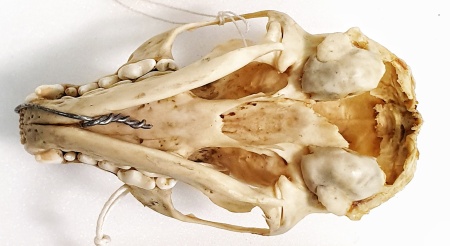 There are some decent online resources with images of Marten skulls, so it is possible to get a handle on some options. Each bulla is a 3 dimensional structure that is inflated in subtly different ways that are really hard to describe.

In a previous post I had a similar specimen (the same species as it happens) as a mystery object and I compared some bullae, but alas the image I referred to has since been removed. However, the important point is that there’s only one of the Martens that seems to have an outermost lobe that has a well-defined anterior sulcus (a fissure towards the front edge). This feature makes me think that this is a European Pine Marten Martes martes Linnaeus, 1758.

Thanks for your help in working it out!