Last week I gave you this flouncy fish to try your hand at identifying: 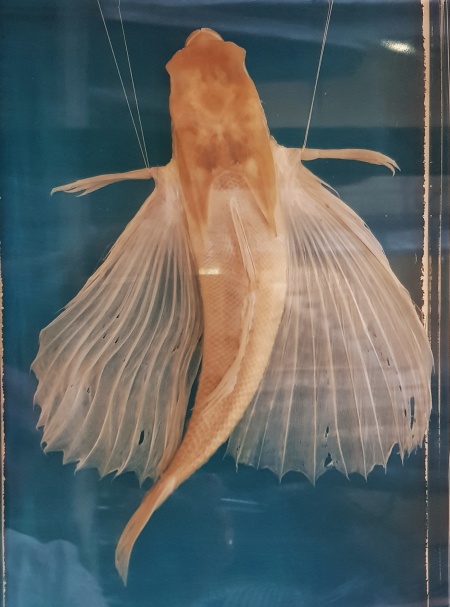 It proved a tricky one, because it seems that based on genetic data it may be a species that has undergone convergent evolution with another type of fish to produce something very similar morphologically, but not actually closely related.

The similar fish would be the Sea Robins in the family Triglidae, as several of you opted for, but Wouter van Gestel and Rémi were a little more accurate in their cryptic suggestions of Flying Gurnard Dactylopterus volitans (Linnaeus, 1758).

These fish don’t really fly and only a few sources suggest that they can get any kind of glide going. Mostly they stick near the ocean bottom in shallow waters, using those oddly leg-like front fins to manage their more pedestrian movement and using the wing-like large fins to ‘fly’ underwater.

This particular specimen has lost its colour, thanks to the process of being preserved in alcohol, but when they’re alive they’re very colourful, with electric-blue spots on the fins. Perhaps more interestingly, this specimen was collected by Sir Frances Leopold McClintock, who achieved renown for his polar exploration and who was stationed in the Royal Navy’s North America and West Indies station as Commander-in-chief between 1879 and 1884. Since this specimen is from Jamaica, it seems likely that it collected in that period.