On Friday I gave you this pair of bones to identify:

It didn’t take long for the type of bone to be identified, with Anthony Wilkes immediately spotting that these are the quadrates of a bird. Then things got more tricky as the type of bird became the focus of the identification.

Robin was the first to recognise the family and likely type of bird, with henstridgesj concurring, with the agreement being on these quadrates being from a Macaw, probably from the genus Ara Lacépède, 1799.

In case you’re not sure what a Macaw’s quadrate looks like, here is a Red-and-blue (AKA Red-and-green, or Green-winged) Macaw Ara chloropterus (Gray, 1859) skull with the left quadrate highlighted: 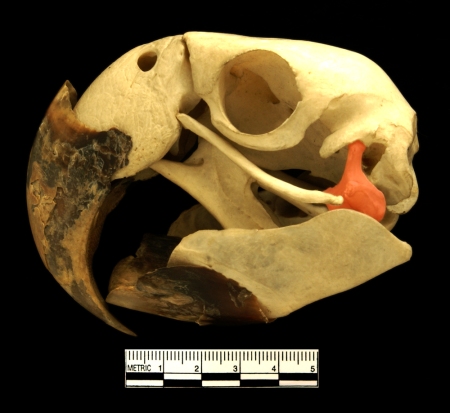 Macaws have an incredibly large and powerful bill, which they can use to open some pretty tough nuts. This is part of the reason why their quadrate is so large, as it deals with some impressive forces and it allows them a great deal of control when manipulating their food. Here’s a video of a Blue-and-gold Macaw opening a Walnut. Impressive stuff!