On Friday I gave you this very easy, but hopefully interesting object: 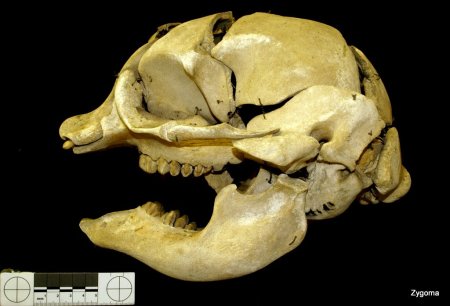 Unsurprisingly most of you managed to identify this as being the skull of a juvenile or more accurately neonate (new born) Elephant, or more specifically Asian Elephant Elephas maximus Linnaeus, 1758.

This specimen is fantastic for showing how a skull is made up of bony plates, which fuse as an animal grows. The flexibility of the skull during birth is important, when the precocious infant has to fit through the mother’s pelvic arch. Elephant neonates are precocious – meaning that they are well developed when they emerge – so they can stand and follow their mother within a few hours of being born. This means that they are big (maybe 100kg at birth) so there’s a lot of squeezing going on.

Despite their large size, baby Elephants have a lot of growing to do before they reach their adult size. They can drink 11-12 litres of milk a day and they often aren’t weaned until they’re 3 years old and they don’t reach maturity until they’re 12 or so. That’s plenty of time to learn with mother – which is how the skills needed to survive are passed on.